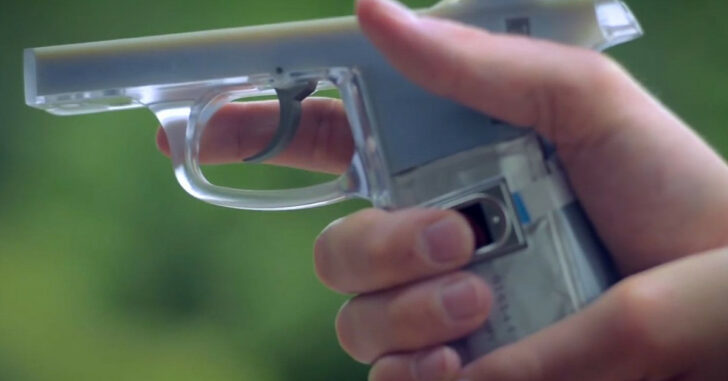 CAMBRIDGE, MASSACHUSETTS — Working out of his parent’s home, MIT student and entrepreneur Kai Kloepfer has successfully built and fired a handgun equipped with a fingerprint sensor like the ones commonly seen on new smartphones. The device stops the gun from firing unless Kloepfer’s finger is specifically pressed against it. If the gun falls into another person’s hands, it’s essentially useless.

“I think this could be huge. I think it could really be the future of firearms,” Kloepfer said to WDEF News 12.

But, as the president of the National Shooting Sports Foundation pointed out, there’s plenty to make gun users wary.

The device works off of battery power. The fingerprint has to be clear and legible in order to activate the device and discharge the firearm. However, when the battery runs out, the device won’t be able to send a signal to turn the gun on.

But that’s where I’m going to stop you.

As someone who follows firearms-related news and politics, this isn’t even close to the first time I’ve read about someone inventing a way to stop a gun from firing.

Back in 2014, Armatix was a smart gun manufacturer that produced a gun that wouldn’t fire unless you had a certain watch on your wrist. Gun owners protested in mass from selling it in stores because the gun was considered to be a big liability.

That didn’t stop New Jersey from threatening to require “smart guns” for anyone wishing to buy a handgun. Even the New Jersey legislature — one of the most adamantly anti-2A legislatures in the country — was forced to back down from that. Why?

Because there’s nothing smart about “smart guns”.

The only way these types of guns will succeed in the market is if they are forced upon people who don’t have a choice but to buy them.

This recent example is just another version of the same thing: a gun that may or may not fire on request.

Is that something anyone would want to protect themselves with?

And every single time, the same tired statistics get dragged out of the closet. We get the number of deaths resulting from accidental (negligent) discharges. The number is hovering over 600.

Okay, what’s the next one? Suicides. Something to the order of 20,000 deaths a year due to firearm-related suicide.

How does a smart gun stop either from happening?

It’s not like the gun can detect which direction you are pointing it and stop the trigger from firing — if it even fires in the first place.

And let’s add one more important piece of the equation — if a smart gun isn’t activated by an electrical device, it doesn’t shoot. Let that sink in. So if you dive behind a vehicle and it’s pouring rain outside and you’re forced to wait in a puddle because it’s the only cover you have available, now you have to hope the rain and water hasn’t shorted out your gun.

Heck, if you carry the gun in an OWB holster while out in the rain, you have to hope it doesn’t short out the device’s electronics.

Unlike a smartphone, we can’t just buy a $60 Otterbox to keep our guns dry. Modern guns are made to go through the ice and snow, swamp, and sand. Now there’s a device that can stop them from working when exposed to those conditions.

Okay, another scenario: you’re out camping in the woods for three days. Your pistol ran out of battery life or doesn’t have enough to recognize your fingerprint. And, for some reason, that’s the day a bear or a moose decides your camp looks awfully inviting…

See where we’re going with this?

If there is any common situation or circumstances where a gun could potentially fail due to a completely optional electronic piece of equipment that’s critically embedded into the firearm, that device is a liability.

It’s hard enough designing firearms to work with manual external safeties — an extra step that needs to be artificially engineered in the gun’s process. Now we’re going to trust technology that routinely fails on smartphones to save our lives?

No, no, no. These “innovators” need to stop “being the next Mark Zuckerberg” of “smart guns”. Mark Zuckerberg learned how to make billions of dollars off harvesting and selling people’s metadata. That’s not a great analogy when considering a tool you depend on working reliably in the event of an emergency.