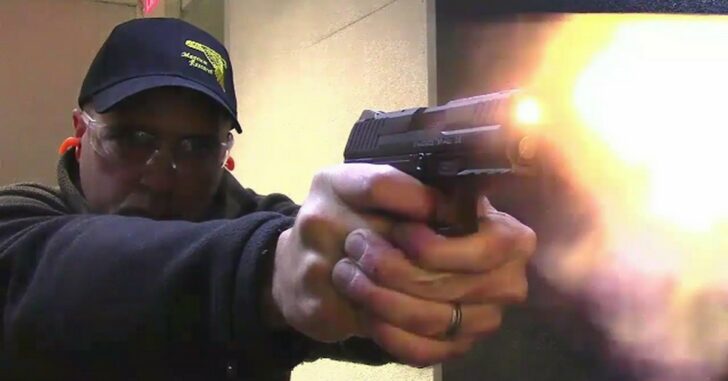 “See first with your mind, then with your eyes, and finally with your body” – Yagyu Munenori

If there is a single element of mindset that seems to truly separate those who take self-defense seriously from those who don’t it is the mental visualization of possible defensive scenarios. This mental activity is called by a lot of names, I personally refer to it simply as If/Then visualization. Jeff Cooper, the founder of the teachable principles of mindset, referred to this as If/Then thinking. Use any term you like. Essentially this is simply the process of thinking to one’s self, “if this happened right here, right now, what would I do?” This is actually a valuable process for preparing yourself for any kind of crisis but here in particular we will analyze the role of this mental exercise as it pertains to self-defense.

Inter-personal violence is out there but it is hardly a daily occurrence for the average American at this time in the United States. There are certain neighborhoods and vicinities that see constant violence, but it is hardly a daily event throughout the land. However, we all face the definite possibility of criminal assault, no matter how “nice” our neighborhood is. Violence is still far too common to be discounted and those of us that study self-defense are aware of this fact. Civilian world conflict is quite different from military conflict. Whereas a soldier may become experienced in combat, a civilian will rarely have the opportunity, thank God, to become “experienced” in combat with the criminal element. The problem, however, is that violent criminal attack in the civilian world is an exceedingly dangerous situation for the victim when it does occur, so preparing for it in a number of ways is wise.

Training to deal with criminal violence is, of course, accomplished through square range training with your firearm, combatives training, physical fitness training, force-on-force training against live adversaries, and other means. However, the most essential element of being able to defend one’s self is mindset, and an integral part of this mindset is If/Then visualization. The way to prepare yourself for a violent encounter with the worst of humanity is to be there 1000 times already in your mind before the real thing happens, if it ever does. Now will commence the accusations of being paranoid or of living out ridiculous James Bond type fantasies in one’s head. Hold on. The visualization that we should do is not action movie nonsense, it is of real possibilities based on real and researched criminal conduct. It is not a mental discipline that should make you paranoid. It is simply the exercise of looking at your surroundings, wherever you currently are, and asking yourself: if this were to happen right now, what would I do? Work out an entire scenario based on a realistic threat in your mind and consider all possibilities.

Here is one example. Do you spend much time at gas stations? If you are an average American I am sure you do. We spend a lot of time driving and, unfortunately, a lot of time filling our gas tanks. The next time you are standing at the pump do this: look at the environment around you and ask yourself, what would I do if the door of the car at the next pump opened and a bad actor walked over to me and put a gun in my face to rob me? What would you do? Look at your environment. Is there cover you could immediately move behind while you drew your own weapon? I bet there is, perhaps your own vehicle or the gas pump itself. Could you get behind that cover or would you trip over the gas hose? Maybe you should always stand on the other side of that gas hose from now on. If you started shooting, are there innocent bystanders who could be in jeopardy behind your line of fire? I bet there might be. If you were focused on the threat, might he have buddies who are behind you that you never noticed to begin with? WHAT! Did you not even notice who was behind you until now?

If you do this exercise the next time you are at the gas pump you have accomplished several things. First of all, you have gone through a mental game that should change your behavior. Do you now stand on the correct side of the gas line out of habit, the one that is more advantageous to you based on where the danger is most likely to come from in the current environment? Situational awareness alone will not enhance your actual defensive tactics, but visualization will. Do you now more diligently pay attention to what or who is behind you and all around you? If/Then visualization will enhance your situational awareness to begin with, making it less likely that you will ever need the other skills since you can more likely avoid trouble before it even starts. Do you also now have a better understanding of what your defensive tactics would be? Moving to cover, taking action, etc… This practice is so simple in theory, but it is the game of champions when it comes to practitioners of self-defense.

Let’s do one more. Next time you are in McDonald’s (don’t worry, I eat there too on occasion) look around you. If you were standing in line about to order and a couple of dudes in ski masks walked in carrying long guns and held the place up, what would you do? Did you see them coming before they came through the door or are you so engrossed in reading the menu and checking out the cutie in front of you that you missed the show until they were standing right next to you? What would you do? Is there cover nearby? Is there a LOT of people who could get caught in a cross fire? Would you even risk it if you are carrying your little 380 auto in your pocket? If it looks like they are pros that just want the money and will not hurt anyone will you let them walk out the door instead of starting a gunfight with a lot of innocent people around? I would say that is a smart move, but have you even thought about that option before, or what indicators may lead you to believe that they won’t hurt anyone, or will indeed start killing people? What if you are sitting in the restaurant, are you somewhere that you can see the entries and exits? Is there cover nearby? You get the idea.

The practice of If/Then visualization is essential when it comes to preparing yourself for violence. The latest tactical flashlight or enhanced magazine release for your pistol means very little despite the fact that these trivial matters garner the vast majority of printed space in gun rags and internet forums. Visualize, you will dramatically improve your situational awareness and your ability to respond to the worst that humanity has to offer.