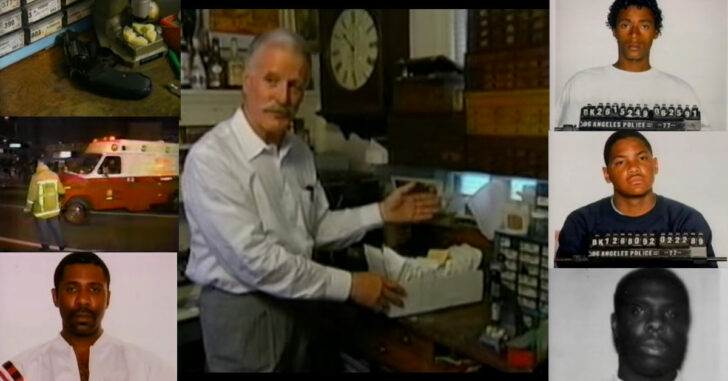 Lot of folks around here likely remember the Justice Files. But when we have conversations about real life concealed carry gun use, we have to take a moment to remember the pivotal lessons delivered in one episode about the Los Angeles watch repair man who refused to be a victim. We’re talking about Lance Thomas.

Lance Thomas, for those unfamiliar, first got a .38 S&W to defend his shop after a serious of violent robberies took place in the area. Other shopkeepers were arming up as gang violence escalated precipitously in the early 1990s. Lance was just one of many shopkeeps on the frontlines of honest law-abiding citizens stuck in the DMZ of gangland, USA.

Lance put the first gun he owned at his repair station next to customer’s watches. The first incident occurred within weeks of getting the gun.

Two armed robbers entered his store and beat one of his customers on the back of the head. The customer went down and one of the armed robbers leveled his gun at Lance and threatened to kill him.

Lance made a pivotal decision which he describes as, “in an instant, I choose not to be a victim.”

He knew he wasn’t fast and he knew a gun was leveled right on him. He still managed to retrieve the gun and fire one well placed shot into the robber’s head. The robber survived the incident and went on to serve five measly years in prison while his accomplice managed to escape.

“I’m not the fastest gun in the West,” Lance explained. “I’m not Wild Bill Hickok.”

This was Lance’s wake-up call. The reality of an entire future generation of idiot gangsters with nothing to lose were on his front doorstep, threatening himself, his business, and his customers with deadly violence. He could either cave in, hope to God they’ll show mercy, and lose everything or he could defend himself, his store, and his customers.

After that, he confided to Justice Files, he started training with pistols extensively.

“What if I didn’t have the gun there but on the desk? What if, what if, what if? There were too many ‘what if’s. I needed to reduce the probability of losing my life.”

Training at a gym several times a week and working through gun fighting techniques related to any possible scenario in his store helped him prepare a comprehensive plan to maximize his chances of success. He began strategically placing pistols all throughout his store so that he was never more than three feet away from a handgun.

Little did he know, he’d be forced to defend his life again in only a few short months.

The second incident happened at 7:15 p.m. Four armed robbers moved on the store. Two watched the door and two entered into the store itself. As Lance described it, there were three customers and another employee in the shop. It wasn’t just his life on the line.

He told his customers to hit the floor and he proceeded to defend his life at point blank range against automatic firearms. He was shot three times in the shoulder and once through the neck but managed to kill both robbers. The two robbers watching the door fled the scene.

He was taken to the hospital and recovered.

Normal folks, at this point, would have probably said that’s enough and closed up shop. Lance doubled down. He redoubled his efforts in training with handguns and quickly recovered from his injuries.

“Let’s go all the way back, mentally, to ground zero [of the incident]. I’m faced with an armed intruder. Now, I have to make a mental decision to be a victim of his mercy… Or exercise my right to self defense and fight back. And in fighting back, part of that is a willingness to die and to kill. It’s a hard choice.”

After two failed gang-land style robberies, you’d think the bad guys would get that his shop was a dangerous place to rob. The problem with that is those targets are specifically desirable by gangs. Not only does successfully robbing a well-protected business prove the worth of the dirt bag who does it, it sends a strong message to other businesses and law-abiding citizens that resistance is futile.

The next armed robbery attempt happened only a couple years after the last one. In this situation, the armed criminal pointed his pistol at the watchmaker’s face and told him if he reached for his gun, he would kill him.

Lance told the Justice Files he did reach for his gun and was shot once through the neck. That didn’t stop him. He returned fire and killed the armed robber.

“I went to the hospital. It [the bullet] didn’t sever my spinal column and it didn’t cut my jugular, so a band-aid sufficied and I was back at work the next day.”

At this point, the Justice Files host was visibly shaken from the stories that Lance was telling him. We’re conditioned in our society to comply with violent criminals and hope for the best. We’re told that if we just do what the bad man says, we’ll be alright.

“He said, ‘don’t do anything or I’ll kill you.’ So why do anything?” the host asked Lance. “If you hadn’t reached for your gun, maybe you wouldn’t have been shot? He would have gotten a few of your watches but it would have been over.”

Lance was quick to point out that this line of thinking is trash.

“It would have been up to him, wouldn’t it? He had his finger on the trigger and he intended to negotiate… There’s no negotiation. My life is too precious for that.”

The host was a bit incredulous at this response and asked if maybe, by the third incident, it might be time to pack up and head out. Lance’s response?

“I put a double door in. They came in anyway.”

By the time the fourth incident came, it was clear gang robbers knew exactly what to expect from Lance and ceased expecting him to give up without a fight. The fourth incident involved two gangbangers with a history of violence. They didn’t even try to rob the place. They just ambushed him. By this time, though, Lance concedes that “they weren’t quick enough.”

He shot and killed both of them.

At this point, it was clear that the gangs weren’t going to stop. They were going to keep sending in warm bodies and Lance would keep having to defend his life. He was stubborn but the repeated attacks were beginning to take a toll.

While Lance didn’t look forward to the next attempt, business owners in the area were quick to cheer when they saw he survived and the other guys didn’t.

It was a testament to a man’s right to conduct legal business and not be bullied by violent, idiot men who depend upon hoards of uneducated trash to secure their little fiefdoms.

Unfortunately for Lance, it all became too much. By 1996, he started to pack up and withdraw.

Four attempts on his life and his business… It could be analogous to lightning striking the same place four times. It was beginning to be apparent that the lightning wasn’t random and there was something attracting dumb fools to keep trying.

The problem is that there’s only one Lance and an unending stream of fresh fools.

Lance wisely packed it up and left.

Here’s what we can conclude about Lance Thomas and his story:

There’s only one you and there are countless criminal fools.

And lastly, you can’t use a gun that you can’t access. Timing is everything, placement is everything. Train how you intend to fight and give yourself the very best opportunity for success. That can only come when you take an honest assessment of your life, your habits, and your limitations and cater to those. Do not assume a “one size fits all” approach will work for your own personal defense.

Carry every single day, everywhere you physically can. Practice and train with the tools you intend to use to save your life.

Previous article: Stalker Shows Up To Victim's Home, Opens Fire -- Gets Hit In Return Fire By One Of The Occupants Next article: Son Chokes Mother And Then Attacks Step Father -- Step Father Defends Himself Appropriately