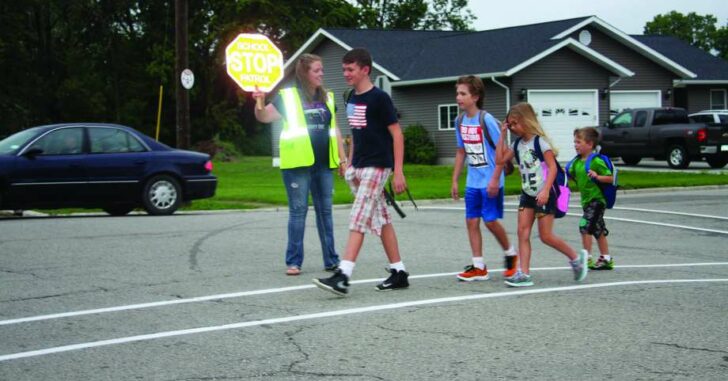 Last week I read an article on concealednation.org about a crossing guard in Harbor Beach Michigan who took her job very seriously. Casey Armitage is a city worker who is trained and has her CPL (concealed pistol license) for the State of Michigan. By exercising her legal right and for the protection of the children she crossed, Casey carried her pistol on the job.

Like the vast majority of legal carriers, Casey contacted her local police chief to be assured she was within her legal rights to carry. In Michigan, it is legal for a CPL holder to open carry in gun free zones however Casey felt the need to double check to remain within the boundaries of the law.
She was told that concealing a pistol was illegal but within the laws of Michigan, it was her right to open carry. Casey said, “ I was told by the Police Chief that concealed carry was against employee policy. I suggested to the Police Chief that I would open carry but never did, He responded that I was within all all rights to do so but was going to bring it to the attention of the city council.”

The Harbor Beach City Council then passed a resolution to prevent city workers from carrying a firearm therefore disarming Casey while on duty. She said, “the city council moved quickly to enact resolution #2016­92 amending the employee policy to include the prohibiting of open carry.
Which left me no carrying options as an employee per policy terms of my employment.” It seemed their decision was based on “feelings” and ”what if” situations. I feel it is good to ask “what if” when evaluating a decision as long as all situations are explored. This story has captured the attention of many people. Many questioned, is it right for the city council to supercede state law and if so what additional security would they provide to assure the children she crossed were safe?

Last week I had the opportunity to interview Casey to obtain more information about this situation. I learned immediately that Casey is not the type of person who accepts decisions based on personal feelings.

Believing in her right to carry and having a defensive mindset, Casey is researching and gathering information from other communities. She believes in her right to carry and provide protection to the children she crosses. She has also received an overwhelming amount of support from her fellow community members. Watch the video to hear Cassy’s prospective and learn more about this situation.

Previous article: *WARNING: GRAPHIC* Man Attacked By Grizzly Bear, And Why His Pistol Couldn't Save Him Next article: The Conversation on Self-Defense: Tips for Motivating Others