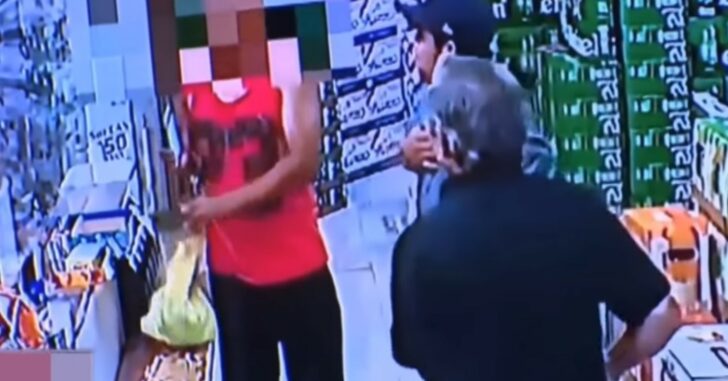 If you own an business and someone steals from that business, you’re going to be frustrated and annoyed. And angry. How we handle those emotions, though, will dictate the outcome.

In this case, a shop owner confronted two guys who stole some beer from him earlier. When they came back, the owner was giving it to them straight.

But then, he goes after one of the guys. It was a move that would result in his gun falling to the ground after falling out of his pocket, and one of the guys picking it up and shooting him with it.

Many things to be learned here, but the two biggest takeaways;

First, we should be trying to deescalate situations as much as possible, and trying to avoid confrontation whenever possible.

Second, having a proper holster that’s going to retain our firearm is essential. If we’re hand-to-hand with someone, the last thing we want is to have our firearm land on the floor and up for grabs.

While I get that the owner didn’t want these guys to get away, and wanted them to be held responsible for their stealing, the outcome could have been completely avoided if the owner had chosen a different route. The best option would have been to hand over the video surveillance to police so that they could try and catch the crooks.

Stealing some beer, although not right, isn’t something to put your life in danger over.

Previous article: SC Bank Teller Shoots At Fleeing Suspect, Will Probably Lose His Job As A Result Next article: Business Owner Drops Burglar the Instant He Walks Into Work