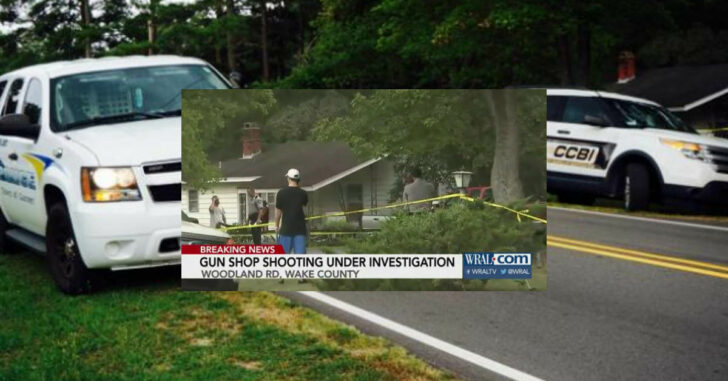 RALEIGH, NORTH CAROLINA — Have you ever made a list of the worst places to rob? If you do, right after a police station would be a gun shop. Two robbers in North Carolina obviously hadn’t worked that list out and attempted to break into Jim’s Gun Shop. The results were… Predictable.

According to WRAL Raleigh-Durham, two suspects attempted a broad daylight robbery of a gun shop around 4:30 p.m. They rolled up in a green sedan beneath a carport and attempted entry through a sidedoor. An employee spotted them and opened fire. Both suspects immediately fled.

Because the business is located behind what appears to be a home and is located in a mainly residential district, perhaps these thugs thought it was poorly supervised. However, there was a customer inside and a store employee. Both saw the suspects arrive and attempt their entry.

Gun shops, banks, and jewelry stores are the prized targets of any entrepreneuring criminal. One good sweep of any of these and there’s enough seized capital to start a legitimate business venture and get out. However, all three are usually guarded by armed personnel. Banks and jewelry stores have sophisticated surveillance systems and when they’re not actively guarded, are still considered hard targets.

In one instance, a bank robber in Spokane Valley discovered that one of the customers was actually a concealed carrier.

High value targets come with high value protection. Trying to walk in through a side door isn’t going to cut it. These robbers figured that one out the hard way.

Now a gun store, you can expect all three. Security systems, armed personnel, and a customer base that doesn’t appreciate getting robbed. Trying to hit that sort of place during normal business hours is just begging for hurt.

WRAL says that the suspects are still at large but it’s our guess if one of them was injured, at least one of them will be turning up sooner rather than later when he has to make a stop at a medical provider.

There’s no good health insurance plan for criminals. Prison healthcare is about as good as it gets. These guys need to stick to hitting soft targets — like a gun free zone.

Previous article: #DIGTHERIG - This Guy and his S&W M&P 40 Pro in a Bianchi Holster Next article: Neighbor Opens Fire On Family Memorial, Killed By Return Fire