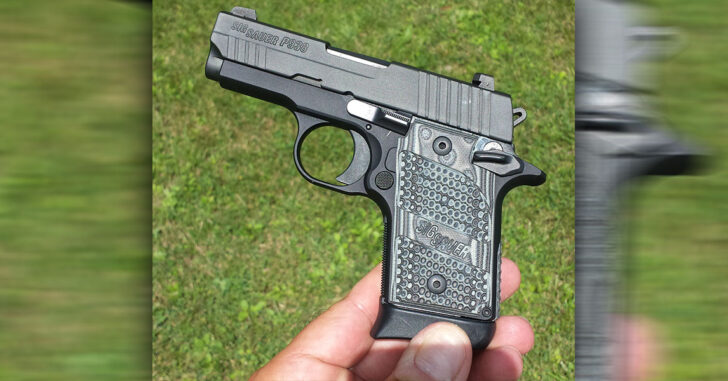 Every once in awhile you run across a gun that you just have to check out. You may have seen pictures in a magazine or saw it at the gun store but there is something about the gun that is very attractive. It also doesn’t help that this particular gun is highly rated and often referred to one of the smoothest shooting single stack 9mm on the market. Well, obviously by the title of this article, I am talking about the Sig Sauer P938.

The Sig P938 is an attractive single action only handgun offered with various colors and grip style choices. The P938 featured is the “Extreme” model that furnishes beautiful Hogue G­10 extreme grips with a beavertail style frame and ambidextrous thumb safety. The main feature that stands out with the Sig P938 is the 1911 style action. Due to it’s single action trigger, this gun is meant to be carried “cocked and locked.”

The Sig P938 resembles a mini 1911 in 9mm. It’s slim, single stack profile with the ambidextrous thumb safety position on the frame will deliver fans of the 1911 similar functions while packaged in a smaller and lighter subcompact handgun. The P938 has a metal black hard anodized frame while still remaining under 20 ounces in weight. It has a skeletonized hammer with a beavertail high on the grip which once again, 1911 guys will love.

The nitron finish on the slide has a nice look and feel. The slide has both front and rear serrations which provide a good purchase when charging the gun. The frame mounted ambidextrous thumb safety allows easy access for both right and left handed shooters. The single action trigger on the P938 is very smooth with minimal trigger travel. The Sig Sauer website says the trigger poundage ranges between 7.5 and 8.5 pounds however my trigger scale measures it at an even seven pounds. A seven pound trigger feels very light due to the minimal trigger travel which works well for a CCW handgun. Many 1911 handguns have a lighter 3.5 ­ 4.5 pound trigger pull however Sig modeled this P938 to fit the needs of the concealed carrier therefore adding some weight to the trigger is a safer way to carry especially with many people pocket carrying subcompact handguns these days. The Hogue G­10 grips work excellent with the Sig P938 Extreme. They offer a fairly aggressively textured grip while looking beautiful. They have a grey and brown wood grain look that sets it apart from other P938 models. It also has a small patch of G10 texture on the backstrap that looks and feels very cool. Sig offers many variations of the P938 and each is different in their own way however this “Extreme” model has both beauty and function which I find very impressive.

Most importantly, my shooting impressions of the P938 were excellent. The short single action trigger travel along with the solid frame allowed me to hit my targets with ease. I found the P938 to be incredibly accurate. Once again, it feels like a mini 1911. 1911 handguns are, in my opinion, the most accurate and easy to shoot handguns in the world. Sig Sauer took those qualities and put them into this P938 to model the 1911 qualities in a little three inch barrel subcompact 9mm handgun.

To disassemble the P938 is not very difficult however reassembling it will require a few more steps that many people are used to. Once removing the magazine and assuring the gun is unloaded, the slide will need to be pulled back approximately one inch to align the circular cut in the slide with the slide stop lever. While holding that position, push the opposite side of the slide stop to release the slide stop pin to remove it from the frame.

Overall, I find the Sig P938 to be a very nice handgun. Sig offers many models that are pleasing to the eyes but mainly the function of the gun is most impressive. I truly enjoyed range time with it due to its ease of use and accuracy. Being a big fan of the 1911, I find this P938 comfortable to shoot while being familiar with the controls. It may be a bit more expensive than many of its counterparts in the subcompact 9mm market however when we look at everything that Sig offers with the P938 (anodized metal frame, Hogue G10 grips, SIGLITE night sights, single action trigger) we find that the value is worth paying some more dough for this quality handgun.

Many guys rave about the Sig P938 handgun as their favorite concealed carry choice. After reviewing it on video and text, I can honestly say that I now understand what intrigues so many people with this P938. It’s an excellent looking and shooting handgun.

Previous article: #DIGTHERIG - Gary and his Ruger SR9E in an Alien Gear Holster Next article: Man Recklessly Shoots Inside His Own Home -- Charged With Deadly Conduct