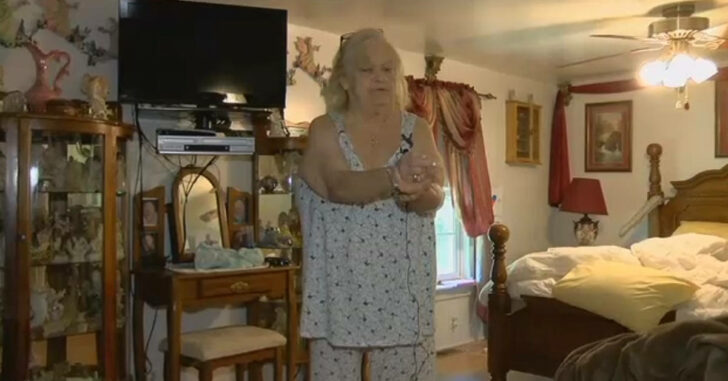 LORIS, SOUTH CAROLINA — A poor elderly woman, her neighbor, and her foster children came under a brutal attack after several armed robbers entered the premise and beat her mercilessly. They came for money and her prescription medication.

According to WMBF News, two robbers used a taser on the woman of the house repeatedly and beat her in the back of the head with the butt of their gun while asking where her money and prescription medication was kept.

Her neighbor, a 78-year-old man, valiantly tried to fight the men but was brutally beaten down as well.

Somehow, she was able to get into her bedroom and get her gun. That’s when the tables where turned on the bad guys.

According to her statement, she got the gun, cocked it back and asked the intruders, “so now you want to play with guns?” before shooting one of them center mass.

He slumped against the refrigerator before both retreated. No word on their whereabouts but there’s guaranteeably someone either dead or about to if he doesn’t show up to a hospital real soon.

This isn’t the first time armed thieves have violently broken in, either. According to the woman of the house, it happened one time before and the intruders came disguised as officers of the law.

This may have prompted her to realize that there’s only so much a person can do to protect the lives of her foster children and herself.

Thankfully, she was able to get to her gun.

No person should have to deal with this sort of mess but when drugs come into the picture — it’s a guaranteed. As an elderly woman, she’s prescribed certain drugs that have a market value on the street. Armed thugs see it as an easy target. One of them likely won’t be back any time soon.

Defending your house is as simple as refusing to be a victim. Sounds simple, but it requires a bit of grit and determination. This woman has it.

One thing is for certain: after she gets out of the hospital, you can bet your bottom dollar she’ll keep that handgun a whole lot closer.

These armed bad guys only got one freebie. The rest will cost them.

Previous article: #DIGTHERIG - Kristopher and his Glock 19 in a Comp-Tac Holster Next article: Armed Citizen Thwarts Attempted Car-jacking While Leaving The Liquor Store