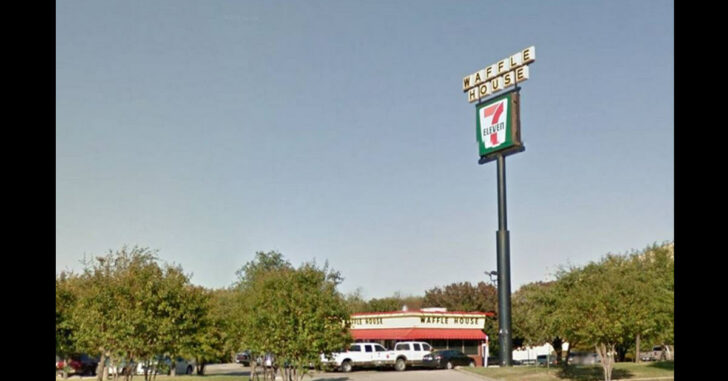 DESOTO, TEXAS — Just South of Dallas, 26-year-old Antione Devon Cooper thought 2:30 a.m. was a lovely time to hold up a Waffle House… And he would have got away with it if he didn’t level his AK-47 variant rifle at a legally licensed concealed carrier.

According to the Dallas Morning News, Cooper entered the establishment and held up the register and then proceeded to rob customers before walking out the door. A legally licensed concealed carrier didn’t stop him because his wife was nearby and feared for her well-being. The concealed carrier waited until the robber was on his way out the door before walking out after him. He called out to the robber who then turned around and pointed his rifle at the man. That could turn out to be his last mistake he ever makes on this planet. The man responded by putting several well placed shots into the robber, effectively neutralizing him.

Police arrived and took the robber to a hospital where he remains on life support.

The concealed carrier was not held up on any charges.

It’s not the course we’d normally recommend in a situation like this because of the presence of so many bystanders. Additionally, the robber is already on his way out. The threat is likely gone. However, this is Texas.

And in Texas, don’t assume a man is going to get knocked down and stay down.

In Texas, it’s perfectly legal to use deadly force against someone committing a violent felony. An AK-47 variant rifle and an armed robbery are two checks on that checklist.

The only thing we would have cautioned is if the concealed carrier wasn’t on top of it. He could have inevitably brought a lot more pain and destruction down upon the people around him. But that armchair analysis is something left up to us internet talk-boxes. The reality is the man made a decision that he was in full legal rights to make and it worked.

The rest, as they say, is history.

He better have gotten his meal on the house.

The reality is that it doesn’t matter what time of the day or night it is. We’ve reported on jewelry store robberies in broad daylight to business owners being attacked while closing their shop.

SPOILER ALERT: The good guy doesn’t always get away with his life. That’s the sad part.

Concealed carriers can be called upon any time of the day or night to defend themselves, their family, and their property. They can also inevitably be tossed into the mix of defending others, too.

In this case, the man’s plan worked.

Train how you intend to fight. Get as many people as you can — including yourself — to safety. You don’t have to fight if you don’t want to but don’t depend on your attacker to have any mercy.

Stay safe out there and carry everyday, everywhere.

Previous article: #DIGTHERIG - Derrick and his Glock 19 in a Wilder Tactical Shinobi Holster Next article: Attorney Breaks Into Elderly Couple's Home, Throws Plants At Them -- Gets Shot