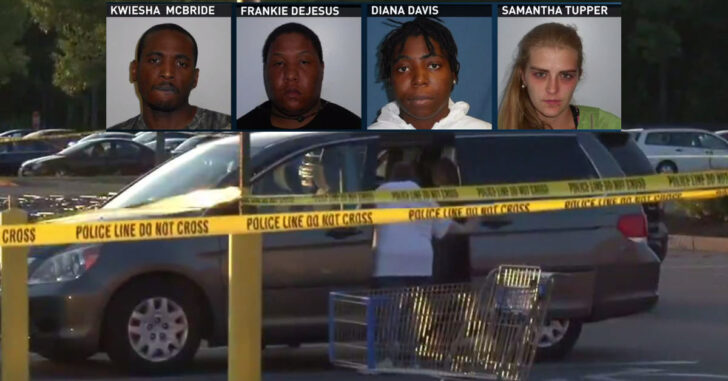 AUGUSTA, MAINE — When a drug deal went sour, two vehicles parked next to each other in a Walmart parking area erupted in an exchange of gunfire. When one of the suspects got out to confront the other vehicle’s occupants, two legally armed bystanders stepped in.

According to WCSH 6, both bystanders were legally armed and held both groups at gunpoint until police arrived. Police arrested four people and discovered heroin on one of them.

One of the suspects, Kweisha “Reggie” McBride of Harlem, New York, was grazed by one bullet and had heroin on his possession. The other two suspects were from New Hampshire.

Typical scummy heroin dealers and shady heroin practices. Heroin is an epidemic in the northeast and those who traffic in it are scum. However, Augusta Police urged law-abiding bystanders to not intervene in these types of criminal activities. Instead, one Augusta officer said to do the following:

These bystanders stepped up to stop a dangerous situation from spilling over and hurting others. While nothing of value would have been lost if the exchange of fire was contained to just those occupying the two vehicles where the heroin deal went down, in a parking lot full of other cars and people, this is a serious danger.

That said, should law-abiding citizens step in to intercede when violent criminal activity is going on?

In some states, it’s perfectly legal to use deadly force when a violent felony is taking place. In others, it’s heavily frowned upon. Know the state law but also be safe.

We can’t stand to risk the life of a good guy when bad guys are intent on taking each other out. Take cover, get other people to stay down, and definitely notify police. When your life is not directly threatened, keep that a priority. Your health and your family are worth so much more than four illegally armed heroin peddlers.

Give us your take in the comments section below.

Previous article: #DIGTHERIG - Bruce and his Glock 19 in a Crossbreed Holster Next article: Residents Fight Back Against Looters By Forming Armed Neighborhood Patrols