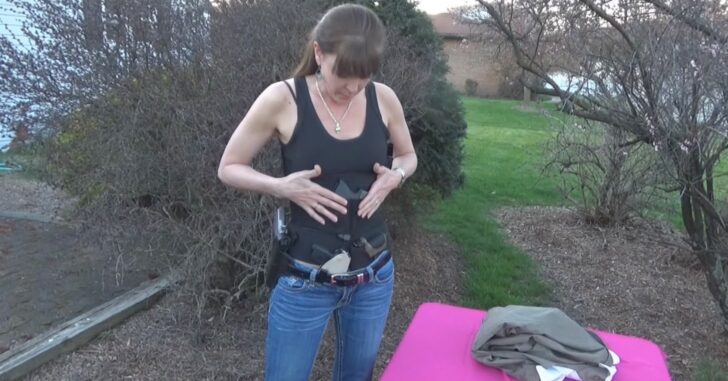 Ralph Waldo Emerson once wrote, “A foolish consistency is the hobgoblin of little minds.” Fair enough, but I’m guessing Emerson didn’t carry a firearm. Recently, my husband and I were rooting through our big bag of holsters that we have accumulated through experimentation and trial-and-error over the course of our time as gun owners. We call it the bag of shame. So, we made a video about the different types of holstering systems that we have both used over the years. Two of them, I use exclusively depending on my clothing choice, and both keep the firearm in the same position for? Wait for it…consistency.

It was kind of funny to look back at all the holster choices we made as we’ve grown as gun owners. We have quite a few that we thought looked like a good idea at the time, but ultimately realized we were never going to wear for one reason or another. Sometimes it is simply that the holster was custom made for a gun one of us no longer carries, and sometimes it just happened to be a carry system that wasn’t particularly right for us strictly as a matter of personal preference, and sometimes we found that the quality of the holster was, in a word, poor after putting it to more rigorous use. I’ll come back to that in a bit.

What we tried to convey in the video, without being terribly subjective about each of the six options I displayed, was simply several modes of carry that someone with my body type could conceal comfortably. I actually left out the bra holster because I was wearing a compression fitting concealed carry shirt, so it would have rendered the bra system unreachable, not to mention, super uncomfortable. Purse carry? Not a fan. I also omitted the ankle and thigh holsters because I would never be able to use them due to my frame and clothing choices. I’m not knocking ankle and thigh carry, I just don’t generally wear clothing that would accommodate anything bigger than a derringer, and unless I’m wearing a dress or skirt, thigh carry wouldn’t even be an option. That said, leaving those three choices off the list, I was still pretty surprised at how many firearms I could conceal in normal clothing.

The compression shirt which has holsters under both left and right armpits is an option for many men and women. It works, but smaller guns work better in those holsters for me as I’m thin, and anything larger than a small .380 rubs against my ribs. One of the options I like is a good belly band. I use them when I’m in a dress or skirt. There are a few really nice brands out there, including CrossBreed, Galco, DeSantis and the one I use, from The Well Armed Woman. All of these belly bands have great retention and the ability to re-holster without having to put your fingers in front of the muzzle. Very important! (As a woman, I can tell you it’s also nice not to have to take the holster off every time you use the restroom!) The other holster I use primarily is a Kydex holster from TWAW. It’s a solid Kydex. The nice feature that makes it especially attractive to women is that the clip of the holster is offset, which makes it much slimmer in a pair of pants.

Another interesting holster was the Sticky Holster. Strange concept for a holster, as there is nothing but body moisture and pressure from the waist in a pair of pants to hold it in place. Oddly enough, it does work as far as I can tell, but I personally don’t have the confidence in carrying a loaded firearm in a holster that’s not attached. But, I haven’t heard of anyone having any problems with it. Some I know swear by it, so I presented it as an option.

One of the holsters that I used in the video was my husband’s. It’s a popular half-shell Kydex holster that he bought and liked but found that he never really wore it much, as he prefers an appendix rig. He and one of our Armed and Feminine instructors, Paul, attended a Rob Pincus course the other day and both guys were using that model holster. Both of them had a chance to put their holsters to the test in a Combat Focus Shooting course. It was an eye-opener for both of them.

Paul’s holster kept coming unhooked with the vinyl belt clips, which actually pulled completely free twice. (Not much is more embarrassing than drawing your gun with a holster on it in front of Rob Pincus.) Meanwhile, within a half-hour, my husband’s holster started collapsing on the trigger side of the Kydex due to the flimsy backing getting sweaty, making it difficult to re-holster, enough so that Rob Pincus walked over to my husband and said, “change that f-ing thing. It’s terrifying!” Luckily, he had his appendix rig in his range bag, which did its job for the rest of the class. I asked my husband that night, “why did you use that holster in the first place if you never wear it?” He said he thought it would be a good idea because the class required starting with an OWB holster before moving to IWB holsters. For consistency sake in drawing, he wanted a holster that was in the same position. He admitted that it was not the brightest move he’s ever made.

I’m not trying to bash the company who made the holster. I don’t get paid to endorse products, and that makes it easy to look at the facts. This brand of holster went 0 for 2 in under an hour by two different people, with two different body types doing the very same actions. When it comes down to it, if it can’t hold up to a shooting course, I’m not trusting my life to it. Lesson learned.  Unfortunately, that holster is going to join the bag of shame.

On a final note, which takes us back to the Emerson quote, the most important aspect of carrying, after you have a good solid carry system is consistency. There is nothing “foolish” about it in the CCW world. If you carry in the 3 o’clock position on Monday, you should be doing it that way every other day of the week. Same goes for appendix or wherever you choose to carry. Also, if you’re going to carry when you’re out and about, then carry in your home in the same way. Even when you have on your nighttime wear, whether it’s pajamas or sweatpants or even gym shorts, carry consistently until you are actually in bed. You don’t want to be thinking about where your gun is if you’re in a critical situation in the home. Frankly, a big number of those incidents happens in the home, so having a gun placed where you can’t get at it makes it merely a 600-dollar paper weight. And if you’re leaving it on the countertop in the kitchen while you’re in the living room watching TV, then for a whole host of reasons, you’re setting yourself up for failure. Find a carry system that fits you, and stick with it!