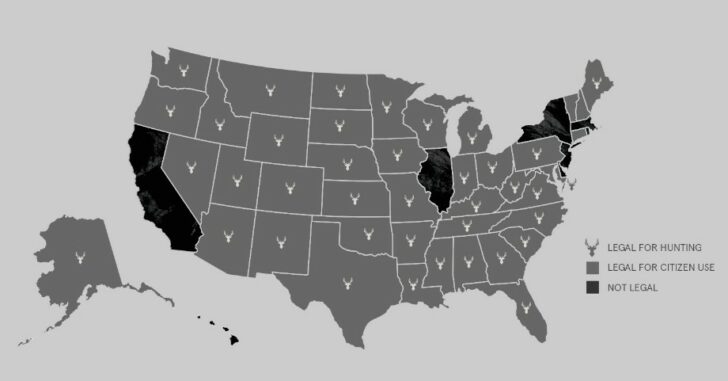 On January 15, 2016, a new Bureau of Alcohol, Tobacco, Firearms and Explosives (ATF) Rule affecting the transfer of items regulated by the National Firearms Act (NFA) was published in the Federal Register. The rule, known as 41F, significantly alters the way that individual members of “gun trusts” or “NFA trusts” operate with regard to possessing NFA items, like a suppressor. Don’t worry, suppressors are still legal to buy in almost every State. Here are the six most important things you need to know about 41F.

Though 41F was signed on January 4, 2016, it does not come into effect until July 13, 2016—180 days after being published in the Federal Register. Keep this in mind as you read through the rest of these points and consider creating a trust and submitting transfer forms sooner rather than later.

2. It is NOT retroactive

Any Form 1 (manufacture) or Form 4 (transfer) applications submitted to the ATF postmarked July 13, 2016 or earlier will be evaluated according to the current rules for making and transferring NFA items—even if your forms aren’t approved until after July 13, 2016. It’s a good idea to start the process now if you are considering acquiring an NFA item.

3. It clarifies the definition of “responsible person” as it applies to trusts

According to the rule, a responsible person is any member of a trust “who [has] the power and authority to direct the management and policies of the trust or legal entity to receive, possess, ship, transport, deliver, transfer, or otherwise dispose of a firearm for, or on behalf of, the trust or entity.” This definition effectively includes any individual who might be involved in the acquisition or construction of an NFA item.

Notably, however, the NFA Freedom Alliance speculates that this wording might open the door for a “non-manager” type of trust member who would not be fully subject to the new application requirements detailed below.

4. It explains what responsible persons must include and do when submitting Form 1 or 4 applications

Rule 41F mandates that any responsible person submitting a Form 1 or 4 application on behalf of a trust must include a 2×2-inch photograph of themselves taken within the year prior to the date of the application, two fingerprint cards, a completed NFA Responsible Person Questionnaire (ATF Form 5320.23), and a copy of their trust. All of these items must be included along with the $200 “tax stamp” check or money order made to the ATF. This effectively requires that trust applicants submit the same information with their forms that individual applicants are currently required to.

5. It removes the CLEO sign-off requirement

One of the good things to come out of 41F is the removal of the CLEO sign-off requirement for individual applicants, eliminating the ability of anti-NFA officials to arbitrarily bar Americans from owning items like suppressors and machine guns. Now individual applicants simply need to submit a notification to their local CLEO by way of sending them a copy of all pertinent documents.

While trust applicants were not required to obtain CLEO sign-off before, 41F mandates that they must notify their local CLEO of any manufacture or transfer of an NFA item.

In the lead-up to July 13, 2016, gun trusts will still be just as advantageous to use as they are now. They still allow trust applicants to circumvent CLEO sign-off.
Following the full implementation of 41F, trusts will still be eminently useful as means for inexpensively transferring NFA items to one’s descendants in the event of trust-holder’s death. In addition, trusts are still the most legally-sound method of responsibly sharing NFA items with others.

DON’T DELAY. GET YOUR GUN TRUST SET UP AND RUNNING TODAY AND ENJOY THE BENEFITS OF OWNING NFA ITEMS SOONER RATHER THAN LATER.