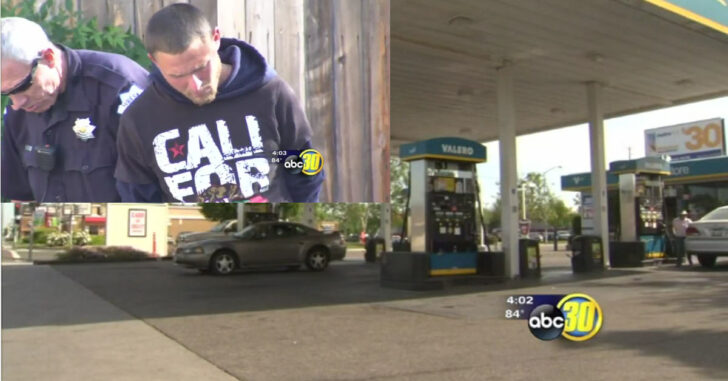 FRESNO, CALIFORNIA — A concealed carrier got more than his fair jolt of adrenaline when a crazed man with a knife charged him as he tried to get out of his truck. According to the victim, he pulled up to a gas station when he saw a man approaching him. When he asked the man’s intentions, the man allegedly took out a double bladed knife and charged him. The concealed carrier quickly closed the truck door and the knife got embedded in the frame and snapped. The attacker wasn’t phased. He went to pick up the pieces and press the assault.

Thankfully, the concealed carrier remembered to carry everyday. It could be the single thing that saved his life.

“I got out and I asked him ‘hey what are you doing?’ He looked at me and yelled and came at me with a knife, and I jumped back in my truck and he stabbed my door. The knife broke and he picked up the blade. When he picked up the blade, I rolled my window down and pointed my gun at him and told him to back off. He just looked at me, turned around, and took off running,” said the concealed carrier.

His alleged attacker, Jason Gonzales, took off running down the street. He was later apprehended a quarter mile down the road by deputies and charged with possession of his broken knife alongside assault with a deadly weapon.

It was nothing the concealed carrier was preparing to deal with when he woke up that morning.

“I’m still shaking. Like I said, it’s something you don’t wake up thinking you’ll going to have to do.”

This is a situation that happened in broad daylight, out in plain view. If this concealed carrier had not been prepared to defend himself, it’s very likely he could have been severely injured or worse. It’s a situation none of us want to be faced with but it’s also the reason why we have to carry every single day.

“The way things are going now, I’m not going to let someone take me away from my kids just because they are on drugs or want $20 or whatever’s in your wallet.”

It’s not just about feeling safe, it’s about actually being able to protect yourself when someone — for whatever reason — decides he wants something you have and isn’t afraid to hurt or kill you to take it. That’s a lesson first and foremost in the minds of any concealed carrier and we hope it’s only more reinforced by this event.