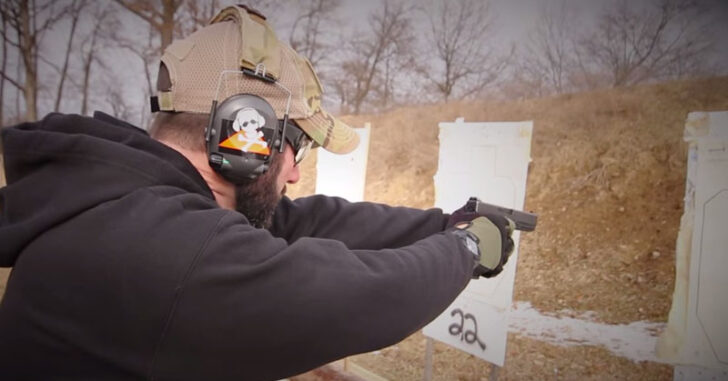 Something even I am guilty of in many certain aspects of daily life is presenting myself as prior military.

As a whole, most of society isn’t as attuned to being aware of their surroundings in such a detailed fashion as military personnel or trained civilians are.  However, there are those few that are.

Career criminals, terrorists, and other evil-doers are among this list.

That being said, it is imperative that we as Concealed Carriers do our best to not make ourselves a target for them, as we could possibly be all that stands in their way when it comes to a successful robbery, burglary, or even worse public shooting. By not presenting ourselves as an outright threat, we are granted a distinct advantage with the element of surprise.

During my time in the military, I received countless classes in relation to anti-terrorist training.  Most of those lessons can be applied to concealed carry as well. A few key points that could be helpful for those that wish to maintain the advantage of not being pegged as a possible threat are simple and straight forward.

So many of us are proud to be supporters of the Second Amendment.  We enjoy advertising it as much as possible. I can’t go through a day without spotting a dozen vehicle decals or t-shirts sporting the latest Second Amendment pride or other related advertising.

There’s nothing wrong with this.   As I said, I’m guilty of it myself.  However, doing so does raise the possibility that you’re more likely to be noticed as a possible threat to a criminal or assailant.  Blending in can be as simple as resisting the urge to wear those military or Second Amendment shirts when going out in public for an extended period of time.  Also, keeping those decals off your vehicle if you reside or work in a highly populated area might be advisable as well. These are just small suggestions, but can have a larger impact when considering the attention such decals and attire may bring.

Step 2: Keep military lingo to a minimum when in mixed company.

In addition to blending in, and I know I am guilty of this as well, keep the military lingo and firearm conversation to a minimal when in a public environment outside of the gun shop or firing range.  I catch myself doing just that all the time.

I will be the first to chime in on a public conversation about firearms and firearms laws, even if it’s not my place to do so, as I do make it a personal goal to educate ignorant anti-gunners whenever I get the chance.

Another touchy subject for some is the debate of Concealed Carry vs Open Carry.  We all know how heated and relentless this debate can be.  My point on the matter when it comes to blending in is rather straight forward.

Open Carry may make you a target — plain and simple.  I do not disagree with anyone who chooses to Open Carry.  I do when I’m at home or working around the house.  But, when out in public, I prefer to remain concealed so as not to draw unwanted attention.  An Open Carrier is more likely to present themselves as a threat to a criminal than someone who is carrying concealed.

Step 4: Make sure your equipment is suited for the environment.

Always practice responsible Concealed Carry by ensuring your holster and other equipment are suited for the activities you’re going to be partaking in. This will help prevent unfortunate occurrences such as printing and accidentally revealing your firearm to the public eye. The most important aspect of Concealed Carry is in fact, to appear as if you’re not carrying a firearm at all.

The main goal of deciding to carry is to protect yourself and those around you.

But it goes beyond just being armed. You must act defensively and cultivate a strong mental attitude. Being aware of your surroundings is just a small part of carrying for defensive self-protection. Dress according to your surroundings. Don’t draw attention to yourself.