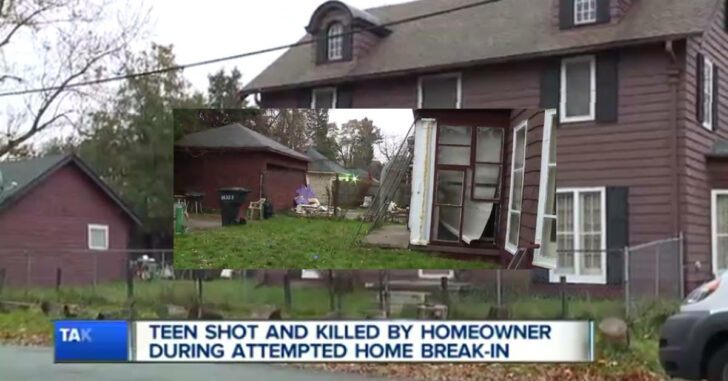 DETROIT, MICHIGAN — An elderly homeowner is forced to come to grips with taking the life of a 16-year-old man who broke into his home with the help of another 18-year-old. He initially refused to talk to the news after authorities found the body of the 16-year-old in the backyard. Both teenagers broke into the man’s house at around 3:05 a.m.

According to WXYZ Detroit, both teenagers violently broke in through the back of the home. Pictures released from the scene indicate they used an excessive amount of force in bashing down a part of the patio. This man likely had very little time to react to save his own life.

The hard part about these types of stories is that the homeowner did what he had to do in order to survive — but it may take awhile to fully acknowledge that. No one said it was easy defending your own life in your own home but it’s a responsibility none of us take lightly.

Police are still investigating the break-in. The second suspect escaped while the first one is obviously dead and can’t tell no tales. It will be extremely hard to identify or locate the second suspect.

In places like Detroit, there’s never a lack of violence. Whether it’s on the street, in the store, or right inside one’s own home, desperate times create desperate men — and some of those men either don’t care or don’t want to care about what they try to do next.

It’s our job to defend ourselves. There’s no politics involved. It’s a simple decision to not be a victim.

This story is still being investigated. Police are not likely to file charges until a complete investigation has taken place. We hope this man is safe until then and that other criminals in the area took the example of the previous two and don’t push for a second chance opportunity. It looks like one resident in that neighborhood of Detroit doesn’t want uninvited guests.

Previous article: Fast Acting Convenience Store Clerk Saves Own Life By Taking Robber's Instead Next article: Husband And Wife Stop Four Violent Burglars -- One Of The Culprits Murdered By His Own Associates, Now They All Pay