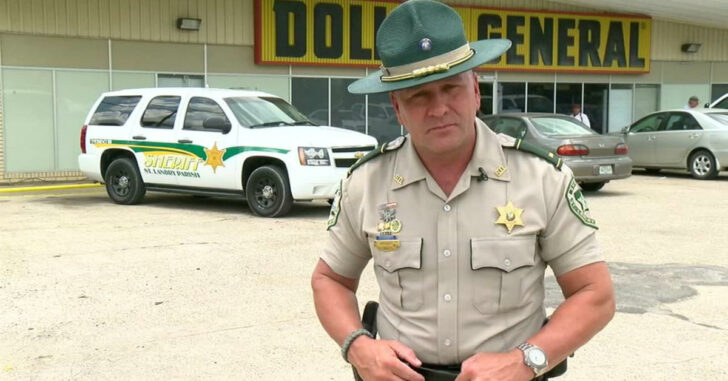 Since the first of his KATC Crime Stoppers videos, in which he routinely called for St. Landry Parish criminals to account for their crimes, a little over a year ago, Higgins, the “Cajun John Wayne,” realized a measure of fame and something of a cult following.

He didn’t hesitate to call criminals “low-lifes,” “parasites,” and “heathens” and the deeply religious Higgins often quoted the Bible and told these fugitive criminals they were headed for hell if they didn’t change their ways. He was also fond of warning criminals that, should they choose the wrong victim, their very lives were on the line.

His authoritative tone and straight-to-the-point monologues made criminals rethink their choices. A day after looking into the camera and telling fugitive Ladarious Young “You can’t hide from what you’ve done, and you’ll never escape … the long arm of the law,” the fugitive turned himself in to the sheriff’s office, saying the broadcast “persuaded him to do the right thing.”

While his videos certainly achieved the results he was hoping for, they weren’t without controversy.

His most recent and most popular video with over 18 million views at the time of this writing, in which Higgins referred to seven fugitive members of the local “Gremlins Gang” as “animals” and promised to “return fire with superior fire” if needed, prompted not only a wave of support from the community, but also some intense push-back.

The American Civil Liberties Union of Louisiana responded, “While we support legal law enforcement and certainly are as concerned as anyone about violence in our neighborhoods, law enforcement officers must be aware of the implications of their public statements. Assuming that what is reported is true, Mr. Higgins has suggested that those he seeks to arrest are subject to execution before trial.”

Family of Gremlins Gang members called for Higgins to be fired and suggested that it was Higgins’ tactics themselves that kept gang members on the run.

When asked via a phone interview to respond to the negative feedback the video had received, Captain Higgins said he “did the video per the request of the Louisiana State Police, and that he did his best with it.” He said “people have a right to their opinion, even if that means disagreeing, and he supports that right.”

As it turns out, the controversy was too much for the St. Landry Parish Sheriff’s Office and Captain Higgins turned in his gun and badge this Monday morning and is stepping down. In his public resignation he said:

Ladies and gentlemen, I would die, rather than sacrifice my principles. I would give my life, leave my wife a widow, and my children without a Daddy… Rather than kneel to the very forces of evil that I so long stood against.

So, if I would sacrifice my life for my principles, surely you must understand, that I must sacrifice my job.”

But not to worry, Higgins says, “my phone’s already ringing.”

It looks like “the most irresistibly intimidating man in America” is a wanted man.

Previous article: "You Just Never Know Who's Packing Heat": Senior Citizen Defends Himself And Wife Against Two Thugs On Philly Street Next article: Two Armed Robbers Walk Into A Liquor Store, Only One Walks Out; Armed Clerk Refuses To Be A Victim