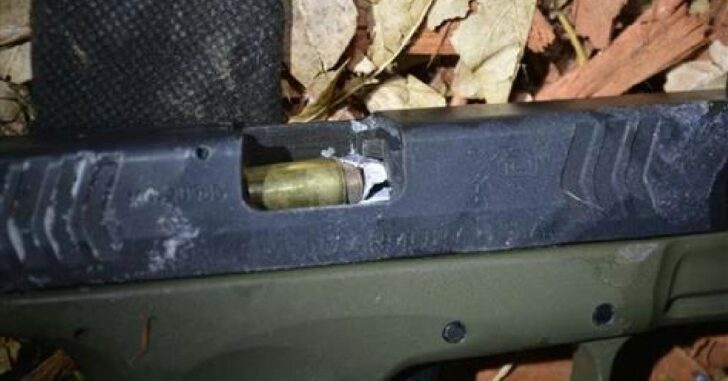 AURORA, COLORADO — In a shot that could probably never be duplicated, an off-duty Sheriff’s Deputy found himself on the other side of the gun when he was held up by two armed men as he was visiting his girlfriend’s apartment.

The Aurora Sentinel newspaper in suburban Denver reports that (Jose Marquez) Marquez was visiting his girlfriend’s apartment when two suspects approached him in the parking lot with their guns drawn.

The off-duty deputy told investigators that one suspect told him to “give it up.”

Marquez says the suspects fired first and he shot back. One was wounded in the leg and arrested, and the other got away.

One of the bullets that Marquez fired, however, found its way straight down the barrel of the bad guy. Gunfire was exchanged and Marquez was hit in the shoulder and abdomen. He is still recovering from the January incident and has not yet returned to work.

One of the two suspects got away and has not been identified. The other suspect was shot in the leg and arrested a short time later.

Aside from the amazingly lucky shot, Marquez shows us another reason to consistently carry our firearms during our daily activities. A simple walk out to the car can turn disastrous.

Previous article: After Concealed Carry Training: 10 Skills To Master Next article: #DIGTHERIG - Andy and his Ruger LCR in a THS Leather Holster