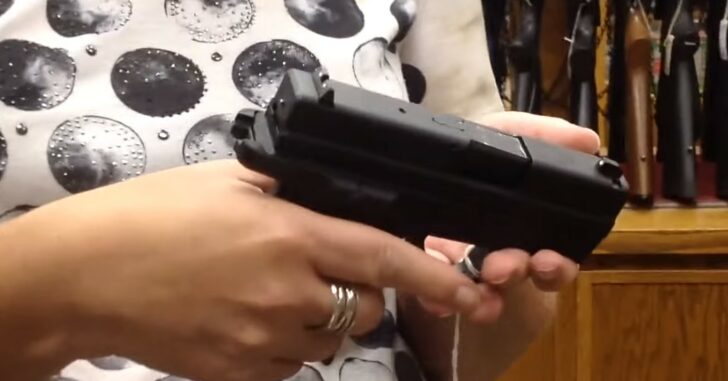 “Honey, you shouldn’t have! No, I mean it, you really shouldn’t have!” That’s the response many women have after their significant others buy them their first firearm. If this isn’t the response at first, trust me, it will be after their first ever trip to the range. And if you ask the husband why he chose the gun for his wife, the answer is usually the same, “I got her a little gun that she can handle easily, you know, something made for a lady.”

So many times in my pistol classes, or at social gatherings, I find that 9 times out of 10, if a woman is contemplating becoming a first-time gun owner, I usually hear one of two responses, “my husband bought me a little tiny .38, you know, the spinny kind” (snubbie revolver) or “he bought me a cute, little, pink gun with the clip thing that slides in” (single stack, sub compact semi auto.) I politely smile and tell them to be sure to practice with those, or come with me some time and try a myriad of other guns to see is something works better for them. In fairness, it’s really no one’s fault. I’m not placing blame or judgement because I was once on the other side of that conversation, and the intention is good.

I cringe because, first of all, it’s clear, she has absolutely no idea how to operate the firearm that has been purchased for her. That alone has the potential to be very dangerous. Secondly, when she does go to the range to fire it for the first time, her husband will likely load the mag or cylinder and simply hand her the gun on the firing line. She will then likely be using a sub-par grip or worse, and not be instructed on the shooting fundamentals. Even if no mishaps happen, women often walk away with very little in the way of knowledge, experience and most importantly, confidence in herself or her ability to competently operate her new gun. One thing that is almost a certainty is that women realize those tiny little guns that are so cute, are not very easy to shoot accurately without a lot of practice. And they often sting! On the flip side, don’t even get me started on the guys who take their girlfriends out to the range and start them off on a .44 magnum…and with no eye and ear protection! With that as her first introduction to firearms, it’s no wonder that so many women are hesitant to try shooting again.

Guys are generally tinkerers or learn how mechanical objects function by trial and error, and that’s fine, but it’s not how most women operate. Women want to know how the gun works BEFORE we pick it up. (And we actually will read the directions!) We want to know the rules. We want to be safe, and most of all, we want to be confident. Believe me, a positive experience with a trained instructor who understands how women think will boost a woman’s confidence as well as anything out there.

So guys, before buying her that firearm, let her go somewhere where she can try out different models for herself with instructors who can answer questions, find out her specific set of needs and uses for a firearm. Will it be a carry gun or a house-only gun? She can also get advice on carry systems, such as belly bands or IWB holsters. Try to keep in mind that entering this world can be very scary for first time shooters, and even more so for women. Once a woman crosses that first threshold, it’s pretty life-changing, and for a woman to have the tools to be able to choose the right gun for herself will make the experience her own. And just like the everyday bra, the gun needs to be comfortable enough to be worn all day, fit right and do its job well. As a bonus, something unexpected that I found is that shooting and training are activities couples can really enjoy doing together. It’s the new date-night!