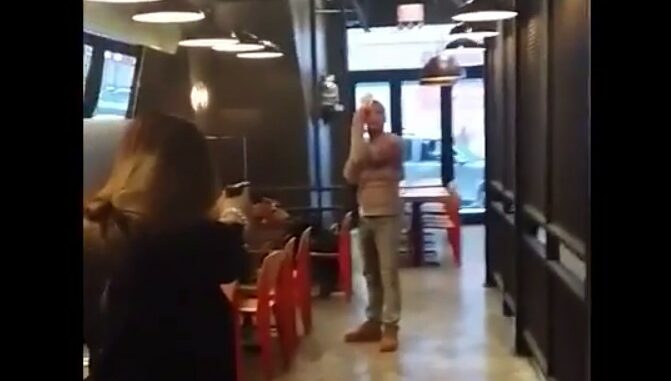 The details on the incident shown above are extremely vague, but it seems that the officer’s actions at the end point to the woman being justified in drawing her firearm, at least preliminary.

It’s important to note at the very beginning of the video, the armed woman is seen pistol-whipping the woman she is fighting with. At that point, the male comes into the mix and starts beating the armed woman while she still has her firearm in hand. Also, her trigger discipline stays on-point the entire time. After the fight breaks up and the armed woman is trying to keep the man away while having her firearm trained on him, he makes numerous movements towards her. Regardless of what happened earlier, so many things could have gone wrong while he was approaching her. The armed woman, however, was able to maintain a level head and continue yelling commands for him to step back and move away.

When police arrive, the armed woman places her firearm on the ground and puts her hands up and out to the side. An officer approaches her with his hand on his firearm. They speak for a few seconds when the officer seems to tell her that she can pick up her firearm and reholster it, which she does. Armed woman reaches down to retreive her firearm that she placed on the ground as officers entered the building.

We’ll try to find out more information on this incident. Assuming that the woman was legally carrying her firearm and was in danger, how do you feel she handled the situation?

And to the woman screaming in the background at the end of the video, you aren’t helping anyone. Just go home and stay there.

Previous article: [VIDEO] How To Remove The Base Plate On Glock Magazines Next article: [HOLSTER REVIEW] The Well Armed Woman IWB Holster - Not Just For Women