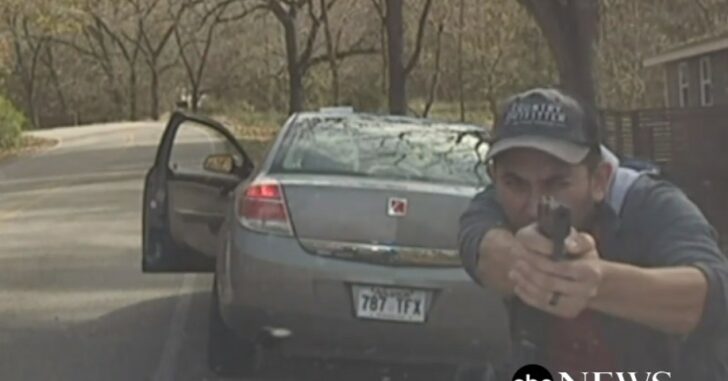 In a dash cam video released by police, a 53-second gunfight between a police officer and a criminal will keep you on the edge of your seat. It happened just a few days ago, and after watching the video it gives anyone even more appreciation for our law enforcement.

Corporal Brett Thompson attempted to stop the driver of a green Saturn for a traffic violation on Nov. 11 near Tontitown, Arkansas, but the driver refused to pull over, according to the Washington County Sheriff’s Office.

In dashcam footage released by the Washington County Sheriff’s Office, the suspect, identified as 29-year-old Luis Cobos-Cenobio, is seen eventually pulling over, leaning out of his car and firing his gun directly at the officer’s vehicle parked behind him. The video then shows Cobos-Cenobio leaving his car and continuing to shoot while approaching the deputy’s vehicle.

After leaving this scene, the suspect pulls over to let a female passenger out. She wanted nothing to do with what he was up to.

It didn’t end there. The suspect got other police departments involved as he was trying to get away. Eventually, he returned to the an area where he exchanged gunfire with other officers and gave up. He was outnumbered, and apparently didn’t want to leave in a body bag.

While watching the video, I couldn’t help but notice the vehicle that happened upon the gunfight. They left in a hurry, that’s for sure. The suspect was seemingly unaware of their presence.

If that were you in the vehicle that approached this event unfolding, would you have high-tailed it out, or would you have tried to help the officer? During their exchange, over 50 rounds were fired. The suspect was injured in the shoulder, and luckily the officer did not sustain any injuries. However, that’s over 50 rounds that didn’t meet their mark. Would the addition of one other person have made a difference? Would it have put more lives at risk?

Just something to think about as concealed carriers.

Oh, and don’t worry. The suspect was caught and faces a charge of capital murder, among many others. Let’s hope this scumbag stays behind bars for life. He’s simply no good.