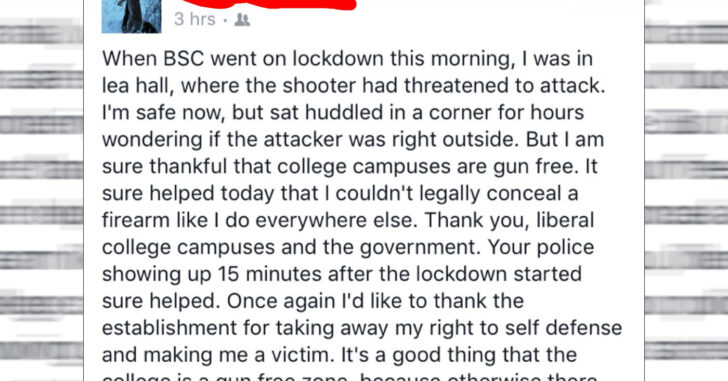 A concealed-carrying college student was a sitting duck recently after a threat was made to a building that he was in at the time. The threat? Someone had threatened to shoot people inside that buliding.

From the student’s Facebook post, seen below (which was posted on imgur), he knew he was a sitting duck because he followed the law… like law-abiding sitting ducks do. The sarcasm is strong with this one, but he couldn’t be closer to the truth. Heck, he’s standing on top of the truth and shouting down to the GFZB (Gun Free Zone Believers) to maybe, just maybe, open their eyes to that they may see the truth as well. The Gun Free Zone is simply an illusion, and that’s really all there is to it.

The better question might be this: What if an active shooter came into the room he was in, and what if he had been carrying? And then, what if he had shot the gunman in self-defense? Do you believe that he’d be held accountable for his actions? Sent to court for having his firearm in a gun free zone? Pleading to the jury that he acted in self-defense and had his firearm on him, in that gun free zone, for this exact reason?

Ah, the world we live in.

Previous article: #DIGTHERIG - Joe and his Sig Sauer P238 Next article: [CCW IN ACTION] Chicago Concealed Carrier Gets Run Over After Shooting Robber