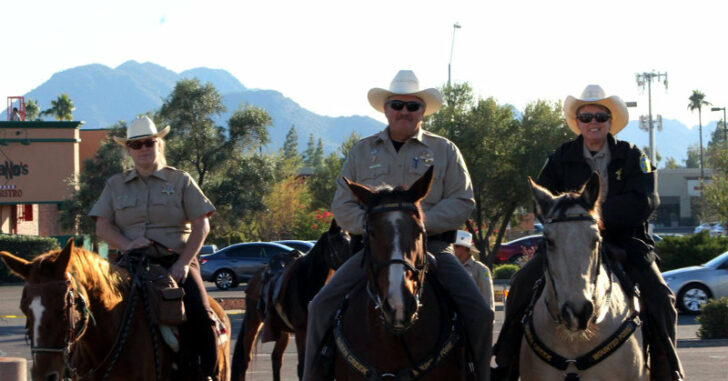 MARICOPA COUNTY, ARIZONA — Maricopa County Sheriff Joe Arpaio is at it again.  Renowned for his controversial opinions and tactics, he’s bringing back an all-volunteer militia to patrol and stand guard over holiday shoppers.  According to the Maricopa County Sheriff’s Facebook page, uniformed men and women on ATVs and horseback gathered to form a posse to deter criminals and keep the streets safe.

“We have to understand and deal with these threats as an entire community in order to best safeguard the public. The first line of defense is law enforcement, and that includes the posse, which has proved itself again and again a most valuable and successful resource though the years,” Arpaio wrote in a release.

Not boo-hoo’ing this effort because obviously if it’s been going on for 22 years (started in 1993), it must be almost tradition at this point to assemble and ride out.  And who doesn’t like seeing a posse patrol kicking about outside malls and shopping plazas?

The only oversight in this is the incorrect assumption law enforcement serve as a first line of defense.  The first line of defense is a capable concealed carrier.  But Sheriff Arpaio seems to get that.  This year, he’s called upon the many concealed and open carriers of Arizona to defend themselves and take appropriate action to violent activities.

“I’m asking for that group to make sure that if some violent activity occurs that they take action to defend themselves, and also the people around them until law enforcement shows up,” said Arpaio.

Close behind a concealed carrier responding to an immediate threat is law enforcement when they arrive on the scene.  And law enforcement traditionally do a fantastic job of that in part thanks to advances in training, education, and communication.

One of the driving factors behind this posse is the ongoing threat of terrorism and violence.  Sheriff Arpaio initially started this initiative in an effort to give a very public presence or “show of force” to would-be criminals who had orchestrated car jackings and violent robberies in prior years.

Robert Merritt patrols malls with the posse and says MCSO made at least six arrests at malls during the holidays last year.

“We drive around the outside of the mall, we come in here, we drive up and down the parking garage here, and we’ll go up to the other floors,” said Merritt.

This past weekend, MCSO says it arrested a woman on its wanted list who was shoplifting at the mall and carrying drugs.

While Sheriff Arpaio’s unconventional tactics have drawn heavy criticism and lawsuits in prior years, it certainly appears he is committed to enabling law-abiding carriers and heavily disincentivizing criminal activity.

Arizona is one of the few constitutional carry states, meaning that citizens who are allowed to own guns may carry them either openly or concealed without a special permit.