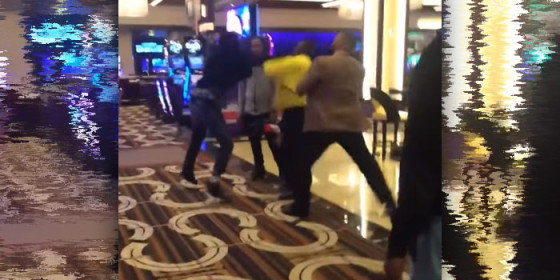 …he let the bad guy get too close and didn’t allow himself enough buffer for a reaction. Man, this is a brutal sucker punch from a low-life punk. What people do is unpredictable, I know. But if someone is being confrontational, it’s so important to maintain a little distance between yourself and them. This goes for civilians, security officers, police… anyone.

And as with many of these videos that make it to the interwebs, there are too many useless people standing around… swearing and giving their 2 cents on “why would you let him knock you out like that?”

Now let’s change up the scenario a bit. What if that security guard had been carrying a firearm, say openly? What would have stopped that punk from trying to grab it? I’m not saying he would have, but I am saying that situational awareness and maintaining distance are crucial.

If you, as a concealed carrier, are ever in that situation… the last thing you want is to be down for the count.

Previous article: Tombstone Re-Enactment Goes Sour -- Fellow Actor Shot By Idiot Who Didn't Check His Gun, Fired Live Rounds Instead Of Blanks Next article: What Concealed Carry Handgun Would You Get Your Daughter In College? We Got This...