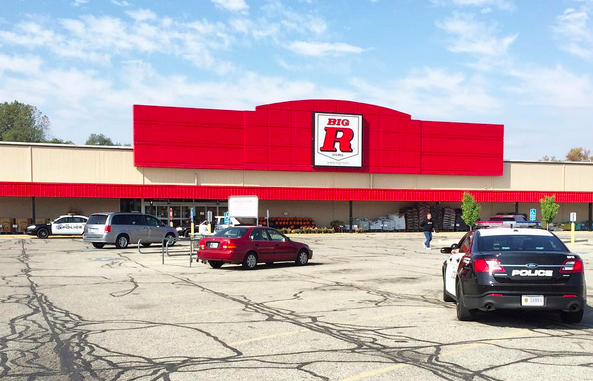 ELKHART, INDIANA — As several people pitched in to try to stop two shoplifters from fleeing the scene of Big R, a concealed carrier allegedly fired a shot at the suspects.  Police questioned the individual but released him.

Just a short time ago, another shoplifter was running out of a Home Depot when a concealed carry permit holder began firing shots at him. He ultimately got away and the permit holder is now facing charges.

“During the chase another subject who was at the store, and not an employee, assisted the employees with chasing the subject and yelling for them to stop. As the subjects who were being chased entered a vehicle the subject who was not a store employee drew a handgun and fired one shot at the suspects. The suspects then fled the scene,” police wrote in a news release.

FOX 28 also confirmed that police determined the shooter had a valid concealed carry permit.  The two shoplifters fled on foot after the concealed carrier fired on shot at them when they tried to flee in a vehicle.

Let’s do a brief recap:

It’s theft from a store where one or more individuals takes item/s that don’t belong to them and leave the store.  It’s called theft.  And big chain stores have insurance and personnel dedicated to “loss prevention”.  When they lose items, they file an insurance claim for the value of the items lost.

Yes, it’s larceny.  That’s why they have video surveillance and police officers and the judicial system.

Sworn officers receive training, are insured by the municipality or state, have strict rules and procedures they have to follow, and more importantly — are sworn to uphold the law.  A concealed carry permit is not the same thing.  At all.

Concealed carriers have the right to defend themselves with a concealed firearm on their person.  That firearm can be used to deliver deadly force if — and only if — the concealed carry interprets a person’s action as a direct and potentially deadly threat against him or her.  A thief with someone else’s belongings, running away from you, does not constitute a potentially deadly threat for yourself or your family.

The only exception to that being that the person in question is armed and believed to be dangerous and about to inflict injury or harm on someone else illegally.  In states such as Arizona, for instance, you are allowed to step in and administer deadly force if you see someone in the act of a violent felonious crime.  As we’ve covered already — larceny is not generally classified (by itself) as a violent felonious crime.

In almost every interpretation of ‘Stand Your Ground’, your permission to inflict deadly force onto another person ceases when the person surrenders, is incapacitated, or is fleeing.

Do not shoot until you know what is in front of and behind your target.  Opening fire on a fleeing suspect necessitates that you don’t.  There’s other cars in the parking lot and there’s other people.  You don’t know who’s crouched down behind a car trying to avoid your gunfire.

This was straight-up ridiculous and irresponsible and this is the sort of cowboy mentality that throws the rest of the community under the bus the second we try to discuss Second Amendment rights in a constructive debate.  Thankfully, the concealed carrier was either a bad shot or just plain lucky because he didn’t hit anyone.  Let this serve as a lesson to the rest of us that this is not acceptable behavior in any civilized society — much less one that comes with the liberty of gun ownership.