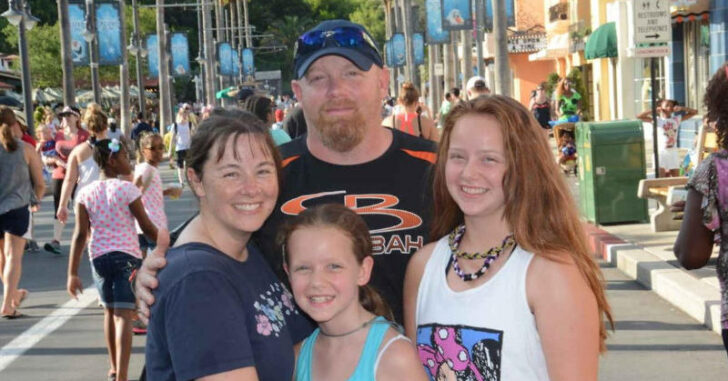 The fourth of July marks the time when our Founding Fathers issued a proclamation to the British government.  And while each year, we celebrate our new found liberty and freedom with fireworks and barbecues – one family in North Carolina is very much on edge about defending theirs.

Tower climbing is one of the most dangerous jobs in the country.  It involves going to cell phone towers all cross the nation with little advance warning and working at heights that would make most men quit.  Many of these towers are located in remote regions and bad, sketchy areas.

When Brian Fletcher mobilized his men to head up to New Jersey, he did what any law abiding gun owner in North Carolina would do when heading into unknown territory – bring his legally obtained pistol.  The mission?  Disaster relief for Trenton, New Jersey.  According to Fletcher, him and his entire team had less than an hour to get their equipment together and proceed north.  And in almost all the states in the Southeast, he would have been perfectly fine bringing his firearm with him.

On the night of June 28, Brian was waiting in a parking lot with his men and trucks to await further word on the next tower.  A New Jersey police officer pulled up behind his truck and inquired as to what he was doing.  According to Fletcher, they discussed the disaster relief work and so forth.  It was then Fletcher handed over his ID and did what any law abiding citizen of North Carolina would do (N.C. Gen. Stat. § 14-415.12A.) – inform the officer that he had a firearm in his vehicle.

And that is where it quickly spirals downhill.

The State of New Jersey does not recognize any state’s right to carry firearms – in the vehicle or otherwise.  In fact, it’s a class 2 felony.  Fletcher went from disaster relief to having his entire life and livelihood in jeopardy in a matter of seconds.  He was arrested and charged with carrying a firearm.  He is currently back in North Carolina following a $25,000 bond.

I had the distinct pleasure of talking to Fletcher on Sunday (July 5) to discuss where he was in the legal proceedings and what we could do to help.

“I talked to my attorney,” Brian said, giving me an update on his situation. “We’re trying to get a Pre-Trial Intervention – if I qualify for that.”

A Pre-Trial Intervention is a program offered through the State of New Jersey to act as an alternative to prison for first-time offenders.  It affords them the opportunity to avoid prison time and criminal history on their record.  It’s only available to first time offenders.

“What’s the likely result of a Pre-Trial Intervention?”  I asked.

“It would be 36 months probation.  If I go through that, I can get it dismissed.  I’ve called my congressman.  The best thing to do will be to get a pardon.  I’ve asked the Sheriff to write a letter on my character.”

When asked about how he felt about reporting his possession of a firearm to the New Jersey police, he responded, “it was the right way I was supposed to handle it.”

According to Fletcher, the initial trial date is July 13.  At present, his NJ attorney is attempting to push it back to August to allow more time to secure a Pre-Trial Intervention.

How can you help?

We’ve included the names and contact information for both Fletcher’s representatives and the representatives in Trenton, New Jersey.  Here is the link to a petition to support Brian Fletcher vs. State of New Jersey.  The more attention we can draw to this, hopefully it will result in Chris Christie’s direct, benevolent involvement.

We urge you to be polite but steadfast in requesting a Pre-Trial Intervention for Brian Fletcher.  He was up in New Jersey performing disaster relief on cell phone towers and he acted exactly as he should have.  The New Jersey Governor, Chris Christie, ought grant an immediate pardon for Brian Fletcher and all charges should be dropped.

Do not hold an innocent man in the cross-hairs because of a lack of recognizing other states right to bear arms.  Brian Fletcher didn’t have a concealed carry permit – and it likely wouldn’t have mattered if he did because New Jersey doesn’t acknowledge those any ways.  Help support a good man in the wrong place at the wrong time!

This is the website where you can send an email to Governor Chris Christie and request a pardon on behalf of Brian Fletcher.  Carrying a firearm with you is a Constitutional right afforded by the Second Amendment of the Bill of Rights and shall not be infringed.

An example letter you can send to the Governor of New Jersey:

On June 28, 2015, Brian Fletcher traveled from his home in North Carolina to Trenton, New Jersey, to assist with disaster relief efforts.  With little time to mobilize, he conducted himself in the proper and legal fashion of a North Carolinian by dutifully informing your law enforcement officers that he had a firearm with him in his truck.

You have the power to pardon this man and not unduly deprive him of liberty and his livelihood.  His family depends upon him to be the law-abiding man we all know he is.

Show your understanding of the principles of our Founding Fathers by granting Brian Fletcher of Butner, North Carolina, a pardon for the felony the State of New Jersey has levied against him for this honest mistake.

3) And if you’re one of the few and proud who really wants to get into it – help Brian gain the support of his representatives and that of those in Trenton, New Jersey.