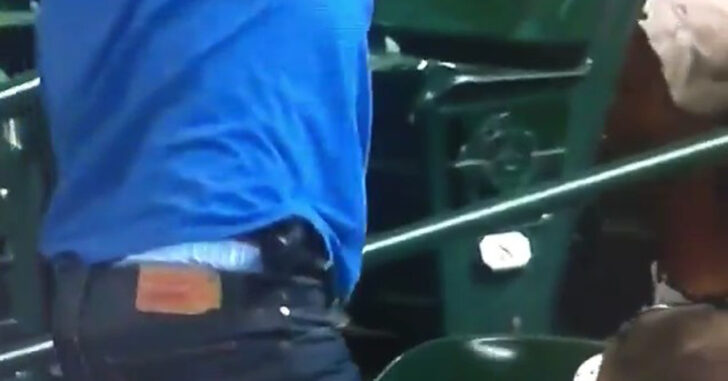 Hoping this guy at Minute Maid is some kind of undercover cop or something. #astros #gun pic.twitter.com/zczA8Bgyqn

A man at an Astro’s game in Houston had a great time getting his hands on a foul ball that came his way. However when he got a hold of it, his t-shirt came up to reveal a concealed firearm underneath. I don’t personally care… but… you can be certain that others do.

In Texas, it’s illegal to carry concealed at a professional sporting event. The first thought that came up was; maybe he’s an off-duty police officer. Upon closer inspection of the video, the man doesn’t seem to be wearing a belt. You can, however, see the clip of his holster. With this information, I’d venture a guess that he’s not law enforcement, as anyone that routinely carries a firearm would know to use a belt with their holster for proper concealment. Legal or not, it’s important to always be mindful of what our movements will do to our concealed carry rig. A twist here or a reach there can leave everything exposed in a second, as we see here.

The Astros tweeted about the incident, revealing that it was a plain-clothed officer:

Some officers were in plain clothes, including the officer who was shown on our broadcast catching a foul ball (cont’d) …as they attended this special ceremony for Tyler Martin.

I guess I was wrong. Dude needs a belt, though.

Previous article: Vince Vaughn Voices Opinion: Guns Should Be Allowed In Schools Next article: What Goes Bump In The Night? 6 Tips On Clearing Your Home