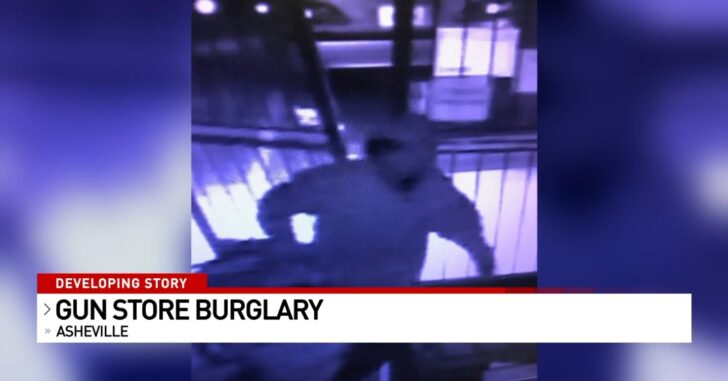 ASHEVILLE, NORTH CAROLINA — A thief made off with several dozen firearms after ripping the front door off an Asheville gun store early Friday morning, according to police. The western location of Carolina Guns and Gear, located at 3106 Sweeten Creek Road in Asheville, was burglarized. The company also has a location in Asheboro, a city located in the central part of the state.

APD officers were able to review surveillance video footage of the crime. In it, the suspect is seen entering the store and grabbing firearms from the back wall. After stuffing them into a large black and red duffel bag, the lone suspect fled the store. The exact number of items taken was not known, but authorities estimated it to be between 30 and 40 guns.

Police describe the suspect as a white male, wearing a dark hooded sweatshirt and dark pants. Based on images in the surveillance video, it appears the suspect fled the scene in a silver vehicle. The investigation is ongoing and anyone with information about this case is asked to call 828-252-1110. People may also anonymously share information by texting TIP2APD to 847411, or use the TIP2APD smartphone app.

Despite the damage sustained to the door, the staff was able to open the business on Friday morning. Carolina Guns and Gear has been in business at the Asheboro location since 2009, and the Asheville location has been open since 2013.

Although statistics for 2021 are not yet available, according to the website Statista, North Carolina was ranked fifth in the number of lost or stolen firearms in the most recent reporting year of 2020 with 828. The top four states, all with 1,000 or more firearms unaccounted for that year were Florida (1,214), Louisiana (1,212), Texas (1,158) and Tennessee (1,064). Unfortunatley stolen guns are seldom recovered, and most often end up in the hands of criminals who will go on to use them in the commission of violent crimes.