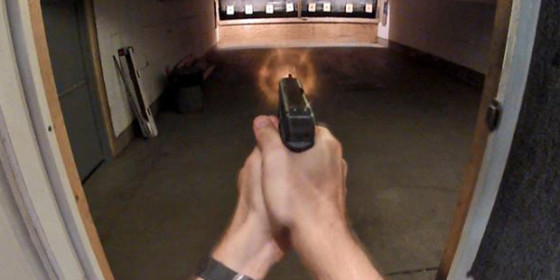 Punching paper at the range is fine. However if you need your handgun to defend yourself, more than likely your target will not be stationary. It’s important to be able to shoot and move.

Here’s a drill that my friend’s and I run quite often. The shooter will stand with their back to the range. Someone will load their first magazine. Round count is unknown to the shooter, they may get three rounds or maybe seven. The first magazine is never full and may have a Snap Cap or two in it. The second magazine is loaded to capacity.

While this is happening, someone else is down range moving the targets. We use blue for no shoot and red for double taps. The target arrangement is different for each shooter. Also we place garbage cans on the firing line, the shooter must maneuver around these or use as cover while clearing a Snap Cap or performing a magazine change.

When we’re ready to go hot, the shooter is handed their first magazine. They chamber a round and re-holster and wait for the command to fire. Then, the shooter will turn, draw and engage. The shooter is never static, move and shoot. Magazine changes and Snap Cap clearing must be done from cover.

This is a great drill to build proficiency in drawing from concealment, movement, magazine changes, malfunction clearing, target assessment and using cover. The first time I ran through it, I realized how clumsy I was. My draw was awkward, fumbled with magazine changes and clearing a Snap Cap. Practice, practice and practice some more.

Now, for a close quarters drill engaging two to three targets we will run this. The shooter stands an arms length from the targets. When the command to fire is given, the shooter will draw and double tap each target while moving backward. Ideally, the first few rounds are fired as the weapon is being brought up. Great training for instinctive shooting. This one is dangerous! Be extremely careful, a Friend’s Father actually shot himself in the foot years ago practicing this.

I realize not everyone has access to a private range to practice these drills. However, there’s no reason you can’t practice the basics. A friend loading your first mag, Snap Caps and magazine changes from your mode of carry. It is very important that you draw from your normal carry holster because after all, we want to practice with what we use on a daily basis.

Always remember; Safety first. If you are running a new drill for the first time, it’s best to do a few dry runs so that you can get the motions down. Then when you feel comfortable, make the switch to live ammunition. We’re always mindful of The 4 Rules, as safety is the top priority. Never attempt something that you are not comfortable with. As with anything else, start with the basics and as your skills build and develop, keep moving forward. Any of the above, for example, are not for beginners.