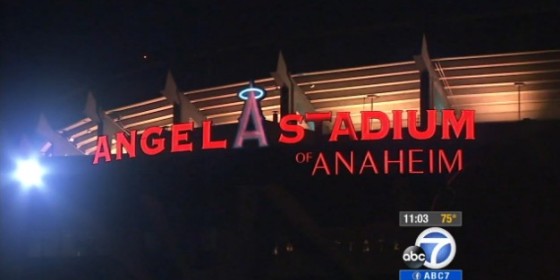 A man was brutally beaten nearly to death after an Angels game at Angels Stadium in Anaheim, CA after Friday night’s playoff game.

According to ABC 7 News, it happened around 10:30pm, and witnesses say that a man was walking back to his vehicle in the ‘preferred’ parking lot when another man came up behind him and began to punch him in the head. The victim fell to the ground and seemed to be unconscious.

“This man started running towards another, and just started beating this guy. He had two punches, the guy went down, he was out cold, and then he started beating his face really bad on the pavement.”

The person who committed the disgusting assault took off with a few buddies, leaving the victim for dead. Witnesses called the police and the victim was brought to the hospital where is is still listed in critical condition.

A mother and her 15-year-old daughter witnessed the attack. The 15-year-old was left shaken and in disbelief; and terrified. She said in an interview,

“He continued to punch him while he was on the ground, and that’s what got me a little bit upset and a little bit scared. When he had ran a few steps away and came back, I started to get even more worried. Is he going to come after me and my mom, or go to anyone around, a witness?”

The mother and daughter came to the victim’s aide after the assailant fled the area.

Stadiums, likely across the country, are places that concealed carry is generally illegal. Some states have clauses in their gun laws that read something like, “…prohibited from carrying a firearm inside an arena that holds more than 5,000 people…” and so on. It’s likely the case in CA as well, where being able to carry concealed even while walking down the street is a tough thing to accomplish.

Had this man — or someone in the vicinity — been allowed to carry a firearm, they stood a good chance of stopping this assault from continuing. Regardless of why it occurred in the first place, it is still an unwarranted and cowardly act.

We can only assume that the assailant wouldn’t have been so tough had he been staring down the barrel of a concealed-carriers handgun.

The assailant has not been found or identified.

Previous article: George Zimmerman To Tell His Side Of The Story Next article: [VIDEO] Bar Patron In TX Now Wanted On Felony Charges For Ignoring State Carry Law After He Shoots And Kills 2 Of 4 Armed Robbers