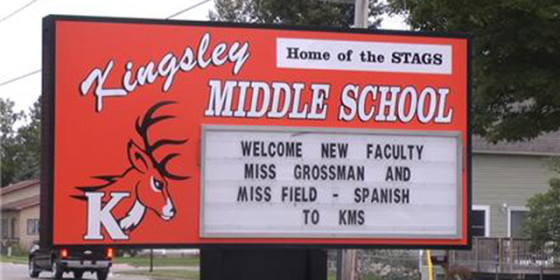 Earlier this week, a middle school student in Kingsley, Michigan brought a loaded gun to school along with a list of names of his classmates.  It’s no mystery what the purpose of the list was.  The student made it clear after he titled the list about a group of classmates he intended on hurting, however police would not report the exact title of the list.

The list, which had been written on the back of a study sheet assignment from the teacher, had been found handed into the teacher’s mailbox.  The sheet was not required to be handed in, but had somehow ended up there.  Investigators went through the list of names on the list, asking the boy why each name was there.  Under sheriff Nathan Alger said that the boy had a reason for every name on the list.  “Some of those reasons would seem very not impacting to you and I but they left an impression with him.”

The 11-year-old boy was caught with the .25 caliber handgun he reportedly stole from his grandfather’s house three days prior to the incident.  His fifth grade teacher discovered the boy had the gun around 2:00 pm and found out that he had been showing it to other students throughout the school day.

One of the students who had seen the gun told a teacher and the principal and a deputy assigned to the school got the student cornered into an empty classroom where they were able to gain possession of the gun without any trouble from the student.  Under sheriff Alger said that there was only one round in the gun and it was not the correct size for the gun, but it doesn’t matter.

“It is a firearm in school. It is a very dangerous situation.”

The student has since been suspended and the investigation is continuing.  There will also be an open board meeting this coming Monday evening with time allotted for public comments.

Thankfully this situation did not get dangerously out of hand, but the fact that there was a student with a loaded gun for almost an entire day at school is still unsettling.  What are your thoughts?