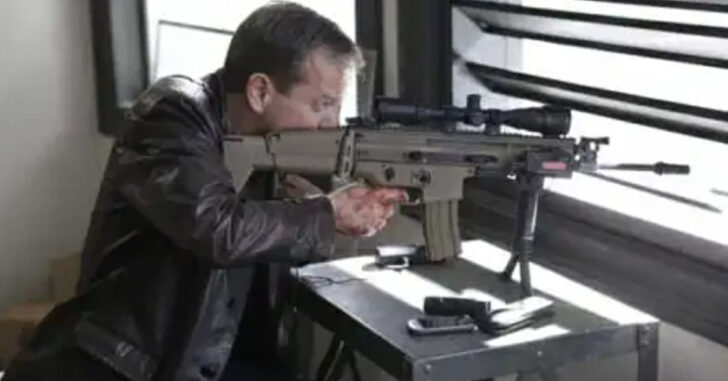 Over the years, FN has made more than just firearms. The company was well-known for producing milking machines, bicycles, motorcycles, jet engines, typewriters, cars, and trucks. FN’s motorcycles still hold several land speed records and their cars have won Grand Prix events. However, firearms have always been their forte.

Chances are even if you do not own or have never seen a firearm made by FN in person, you have definitely seen one on the screen.

The company was formed as Fabrique Nationale d’Armes de Guerre in 1889 to produce 150,000 Mauser rifles under contract for the Belgian government. In 1897, the company partnered up with one of the greatest firearm inventors of all time, an American gunsmith named John Moses Browning, and began to produce his designs under license.

One of the earliest of these designs was the Browning Auto-5. Contrary to popular rumor, the shotgun received its name for its magazine capacity of 5 rounds and not the first year of manufacture, which has been a common naming convention for most firearms.

FN began manufacturing the Browning Auto-5 in 1902. This was the first mass-produced semi-automatic shotgun and remained in production for almost 100 years. It was a popular shotgun with hunters, sportsmen and shooters on both sides of the law. As such it and its various licensed incarnations such as the Remington Model 11 has been featured in a number of films, documentaries and television shows.

Whether it was James Bond shooting skeet in Thunderball or Chuck Norris using a “whippet” version in Lone Wolf McQuade the Browning Auto-5 made an impression as a purposeful semiautomatic shotgun.

Yet that was not the earliest collaboration between John Moses Browning and Fabrique Nationale. In 1896, Browning developed the first semi automatic pistol that used a slide. He demonstrated the pistol to FN in 1898 and production began in 1899 as the Model 1899. In 1900, FN shortened the barrel and widened the grips in an effort to make it more concealable and more comfortable to shoot. The new version was given the name Pistolet Browning (Browning Pistol) and became better known as the FN Model 1900 after FN began producing more of Browning’s designs, like the FN Browning 1903, FN Model 1905, FN Model 1910 and the Baby Browning.

Perhaps one of the more famous contributions by FN and Browning was the Browning Automatic Rifle (BAR) which came on the scene in 1918 from an American manufacturer. This legendary design can be spotted in both World War II and Prohibition era gangster movies and television shows. It was a select-fire, air-cooled automatic rifle using a gas-operated, long-stroke piston rod actuated by propellant gases bled through a vent in the barrel and chambered in 30-06. FN began producing it under license in the 1920s and expanded the chamberings to other calibers that were in use by various European countries as late as the 1960s.

One of Browning’s final designs, and some say his greatest, was completed by FN as the Browning High Power. Browning passed away in 1926 before it was finished, but FN’s chief designer Dieudonne Saive, completed the pistol and it went into production in 1935.

A true game changing pistol, this single-action semiautomatic handgun used a staggered magazine design that was invented by Saive and gave the user 13 +1 rounds of ammunition. Adopted by the militaries of over 50 countries, during the Cold War it began showing up in films and television shows as early as 1949 in The Third Man and it went full bore in the 1970s and beyond as THE 9mm pistol of choice in films like Serpico, McQ, The Taking of Pelham One Two Three, French Connection II, The Big Sleep, Beverly Hills Cop, The Usual Suspects and many others.

In 1947, Dieudonne Saive and Ernest Vervier built the first prototype of the FN FAL. Largely known as “The Right Arm of the Free World,” because it was adopted by many countries of the North Atlantic Treaty Organization (NATO), with the exception of the United States. It is one of the most widely used rifles in history, having been used by more than 100 countries. The early FAL prototypes were chambered in intermediate cartridges like 7.92x33mm and .280 British, in an attempt to create an assault rifle along the lines of the German Sturmgewehr 44, but after 7.62x51mm NATO was adopted as the standard NATO rifle cartridge, the FAL design was altered to accommodate the more powerful round. Coincidentally, FN also designed the 7.62 X 51 NATO cartridge.

This iconic FN-designed rifle made its bones on the big screen in productions such as The Wild Geese, Red Dawn, Congo, 13 Hours: The Secret Soldiers of Benghazi, Hotel Rwanda, Tears of the Sun and Heat. The version chambered in 5.56 NATO known as the FN FNC was also famously wielded in by Al Pacino.

Despite the U.S.’s poorly made decision to not adopt the FN FAL, things changed for FN in a big way when the company received contracts to produce the FN MAG and FN MINIMI as machineguns for the U.S. Army and United States Marine Corps in the 1980s. These arms entered the U.S. arsenal as the M240 and M249 SAW (Squad Automatic Weapon), respectively. The Columbia, South Carolina, plant was opened in late 1970s to meet the growing needs of the U.S. military.

The FN MAG is a general purpose machine gun based on an upside-down Browning Automatic Rifle action with a feeding mechanism derived from the MG42, developed in Belgium by FN during the 1950s. The scaled down FN MINIMI, chambered in 5.56, was developed in the 1970s as a Squad Automatic Weapon.

However, by the 1990s FN Manufacturing began building not just machineguns like the M240 and M249 SAW but the lion’s share of contracts from the U.S. government for the M16 platform. To date, FN has manufactured over 1 million firearms for the US Government.

If you have seen any modern war film or Marvel superhero movie filed or set after the 1990s, those rifles and machine guns were either made by FN or made to look like weapons made by FN. Some of the classic appearances are in Black Hawk Down, Bravo Two Zero, American Sniper, Generation Kill and Terminator: Dark Fate.

The future of firearms began in 1990 at FN

In response to NATO requests for a compact personal defense weapon (PDW), FN took up the challenge and released the FN P90 in 1990. This was a compact bullpup design with a unique and futuristic appearance.

Originally intended for use by military support personnel, this powerful little PDW with an integrated optic became popular with special forces, counter-terror groups and the U.S. Secret Service. Its futuristic look made it an instant hit with filmmakers as well. Pierce Brosnan as James Bond wielded one in 1999’s The World Is Not Enough but it came to prominence in the Stargate: SG1 television series a few years later in 2000. So much so, that most people refer to it as “the Stargate gun.” Dan Shea, stunt coordinator for the series, stated one reason the FN P90 was chosen is that it ejects the empty brass straight down when firing; this allows positioning of actors in a scene without worrying where expended cartridges will be flying. This makes for a truly ambidextrous system, so both right- or left-handed shooters can handle it without problem and activate the selector from either hand.

While blank rounds chambered in 5.7x28mm might be costly, it did not stop filmmakers from picking up on FN’s companion design to the FN P90: the FN Five-seveN.

FN unveiled the Five-seveN in 1998. It is a lightweight polymer-framed pistol with ambidextrous controls, very low recoil and has a standard magazine capacity of 20 rounds. Initially it was limited to military and law enforcement markets but made its way to the commercial market by 2004.

Again, the pistol was a hit and filmmakers saw fit to place it in movies such as Crank, G.I. Joe: Rise of Cobra, 6 Underground and the sci-fi television series Battlestar Galactica.

FN’s 5.7 x 28mm round was a game changer in every sense of the word and ushered in a number of competitors, but FN made some improvements with regard to small arms development firing conventional rounds by 2010 when they released the FN SCAR (Special Operations Forces Combat Assault Rifle). If the name and acronym does not make you want one, you have to see these rifles in action.

Designated as the MK 16 and MK 17 in the U.S. arsenal, these rifles are used by special operators deployed throughout the world. The MK 16 is the SCAR L (Light) and chambered in 5.56 NATO, whereas the MK 17 as the SCAR H (Heavy) is chambered in 7.62 NATO.

Their service with Navy SEALs and U.S. Special Forces teams, coupled with their bold aesthetics made them an instant hit with filmmakers as well. American Assassin, The Mummy, Batman v Superman: Dawn of Justice, Edge of Tomorrow, 24 – Season 8, and Burn Notice, just to name a few.

In case you thought the company was hung up on rifles and machineguns, think again. Never one to stray from their early days as a handgun manufacturer, FN came up with some bold new designs for pistols in this same era, apart from the previously mentioned FN Five-seveN.

The first of these models were polymer-framed, hammer-fired pistols like the FNP-9 and FNP-45. They garnered little interest because FN improved them very soon after their release and designated them the FNX-9 and FNX-45 and made a tactical version in 45 ACP with a threaded barrel and optic mounting plate. The FNP-45 Tactical was the first optics ready pistol available to consumers from a major manufacturer and went on to create the optics ready trend found on most factory firearms today. Agent 13 wielded one in the movie Captain America: The Winter Soldier.

A newer model called the FNS-9 is striker-fired and was the forerunner to the FN 509 series, which was the pistol that should have won the contract for the U.S. Military’s MHS (Modular Handgun System) as it made it to the final round of testing and was not chosen only due to price. When Hollywood gets the word on that, you can bet we will see those in the next big action movie.

FN has never been a company known to rest on its laurels. Their next-generation designs might have a science-fiction look at first glance and make them ripe for filmmakers, but sooner or later they get in the hands of real-world users and as such have dominated almost every military film since the Second World War.

With over 130 years of manufacturing quality firearms that have always been on the cutting edge of technology, we can assuredly look to FN for the firearms of tomorrow for probably the next 130 years or more.

Previous article: Suspect Shot After Kicking In Front Door, Assaulting Woman, Looking For Guns Next article: Call To Police About Home Invasion Leads To Homeowner Being Charged With Murder