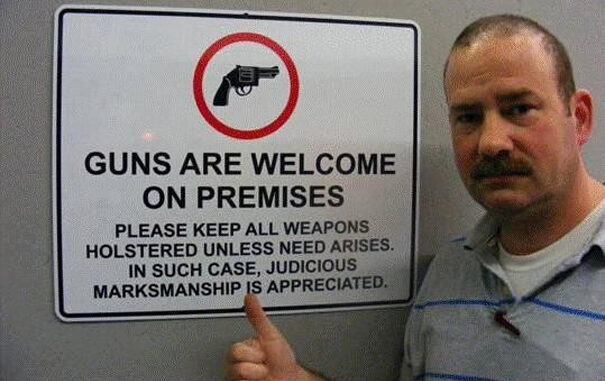 The Wall Street Journal recently published an article about smaller restaurant chains welcoming gun owners into their businesses.  Although many larger national chains such as Chili’s Grill and Bar, Chipotle Mexican Grill, Starbucks, and Sonic are prohibiting guns (or asking customers to leave them at home), many independent restaurants are particularly welcoming to armed patrons, whether in a concealed or open manner.  Some restaurants post signs saying that guns are welcome, while others even offer discounts to customers who arrive armed.

Sharma Floyd, the owner of Shiloh Brew and Chew in Maryville, Tennessee, hung a small sign in the window of her restaurant informing customers that guns are welcome on the premises.  Subsequently, a local news team reported a story on the restaurant owner’s policy, which then caused a spike in business, predominantly due to the influx of clientele who carry concealed weapons.  Floyd says, “I believe in the right to bear arms, and as a small business owner, who am I to take it away?”

However naturally, not everyone is on board with this new approach.  In 2013, Starbucks asked its customers not to bring guns into over 12,000 of their United States locations.  Shortly after, Chili’s, Chipotle, and Sonic followed Starbucks’ request.  Shannon Watts, founder of Moms Demand Action for Gun Sense in America says, “Restaurants routinely protect their patrons from second-hand smoke, so it makes sense they would go out of their way to protect them from bullets as well.”

The restaurants that have invited armed customers into their place of business have reported very few problems involving firearms.  Jay Laze, owner of All Around Pizza and Deli says, “Most that come in are responsible and have their guns holstered.  It was good for business, and I’ve hopefully educated some folks on the Second Amendment and the right to carry.”  Bryan Crosswhite, the owner of The Cajun Experience, made a point to say that he will not serve alcohol to customers who are openly carrying.

And of course owners may expect to see customers deliberately bringing excessive firearms to show off.  “I had a guy show up with an AR-15,” he said. “I told him to go home.”

There have been people in the past who are directly responsible for certain statements issued by companies regarding the carrying of firearms while in their establishments. If these companies aren’t held with their backs against the wall, they would have no reason to issue these types of statements.