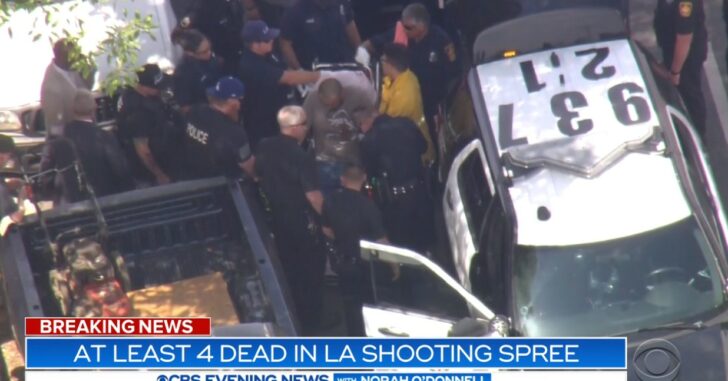 LOS ANGELES, CALIFORNIA — A man is in custody after shooting and killing members of his family, as well as others during a nearly all-day shooting spree.

A 26-year-old man who allegedly shot and killed a man on a Los Angeles bus is connected to three other homicides, police said. Gerry Dean Zaragoza is suspected of killing two members of his family and wounding his mother at an apartment complex and is also accused of shooting two people at a gas station, killing a woman and critically wounding a man.

Some time after this, Zaragoza shot a man in the head on a city bus. Roughly two hours later, he was captured after plain-clothed police spotted him.

For most of the day, Los Angeles residents were on edge, not knowing if the gunman would make another move.

He is also linked to an attempted bank robbery that occurred around the same time.

Thanks to the work of our @LAPDHQ officers, the suspect in a series of deadly shootings in the San Fernando Valley has been apprehended. We're deeply saddened by the loss of life and I've deployed my Crisis Response Team @LAMayor_CRT to support families impacted by the tragedies.

Police don’t have any clues, if any, to figure out why Zaragoza went on a killing rampage.

It would seem that the 26-year-old snapped, but what drives a man to kill his family members and random people in the street? Answers may never come, and reality has shown us that sometimes we’ll never know.

In the meantime, it’s yet another example to use in the discussion of legally armed citizens, who are ready and trained to defend themselves and others against these very people.

Previous article: Suspect Sent Bleeding Into The Night After Being Shot By A Man He Was Trying Steal A Car From Next article: Man Breaks Into House While Homeowner Taking Shower, Close-By Shower Gun Comes In Handy