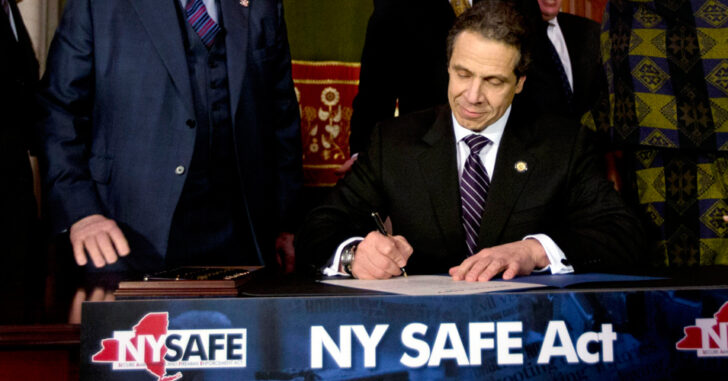 According to Buffalo News, Governer Cuomo’s NY Safe Act has been called up for duty again against another otherwise law-abiding citizen. This ‘7 round maximum’ law is no joke (well, at least not to the arresting officer). A man from the Town of Lockport was a passenger during a traffic stop. During the stop, he apparently let the officer know that he had his pistol permit, and also had a pistol in the glove compartment in front of him. The officer then took the loaded firearm to check the magazine, without reasonable cause we might add, and determined that the magazine was holding 10 rounds instead of 7.

Lockport Police Chief Lawrence M. Eggert said this is the first time city police have made an arrest involving the New York SAFE Act and admitted they were getting compared to Nazis on social media.

“One of the comments said, ‘When are you going to start loading people into cattle cars?’ ” said Eggert.

But he said the department’s role is to enforce the law, whether it is popular or not.

“It’s on the books, and if we see it, we have to do something about it,” Eggert said.

It’s important to note that an officer needs to have probable cause of criminal activity to check a magazine for the number of rounds. While the article does state that the pair led police on ‘a brief chase’, there could be many factors that come into play. I guess what we’re trying to say is this; No one besides the firearm owner went to jail, therefor we don’t believe that probable cause was there. We know, we weren’t there, but logic brings us to this conclusion.

Either way, we feel sorry for this Legally Armed New Yorker and wish him the best. As for the arresting Officer, remember this; There was public outcry about this case for a reason; the law is overwhelmingly unpopular.

Previous article: Carving a pumpkin with a gun; hickok45 does it right! Next article: Background Checks for Ammo Purchases Delayed in New York