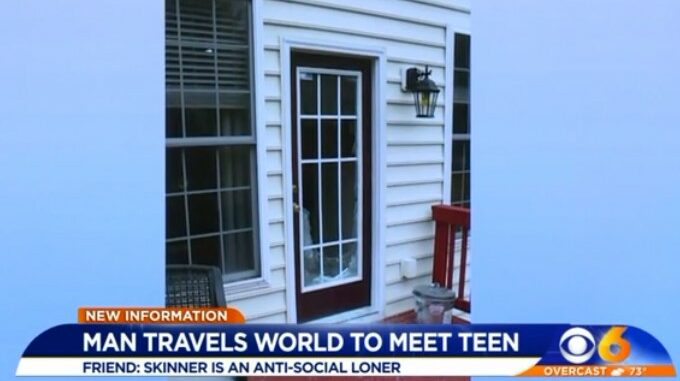 GOOCHLAND COUNTY, VIRGINIA — A woman shot a man from New Zealand after he appeared at her home in search of her 14-year-old daughter. The man, 25-year-old Troy Skinner, had been talking to the teenager online for a few months. At some point, the teenager decided that talking with Skinner wasn’t a good idea and ended communication. Skinner made new accounts under the chat program Discord in an attempt to keep in contact with the girl. After he failed to do so, he decided to head to the US and seek her out.

Skinner then flew from New Zealand to Australia, Australia to Los Angeles, and Los Angeles to Washington D.C. From D.C., he took a Greyhound bus to Richmond. In Richmond, he stayed at Hosteling International USA, according to investigators.

When he arrived at the home, he was yelling that he had hitchhiked there and needed help. The mother, who was at the home with her two daughters, called her husband immediately. The husband’s response: “Grab the gun.” Soon after, Skinner picked up a landscaping stone and threw it into the front door window, shattering the glass. That’s when the mother fired, striking Skinner in the neck. Think that’s creepy? There’s more.

He was carrying a knife, duct tape, and pepper spray — that he purchased at the Short Pump Walmart — when he arrived at the family’s home.

This man was there for one thing, and we all know what that one thing is. This girl’s mother acted quickly and perfectly to the given situation, and ended the threat that was after her daughter. The mother also learned of the communication between the two only after this encounter at the home. Skinner was taken to the hospital and is expected to survive. Police are waiting for him when he gets out of the hospital.

Skinner has not yet officially been charged with a crime but there is a warrant out for his arrest and he will be charged with entering dwelling house, etc., with intent to commit murder, rape robbery or arson.

He was planning to return to New Zealand on June 30th, but it looks like he’ll be missing his flight. Hopefully, this sick individual is dealt with appropriately, and let’s hope that he never has the opportunity to try anything like this again.
Categories: General, Guns Saving Lives, News