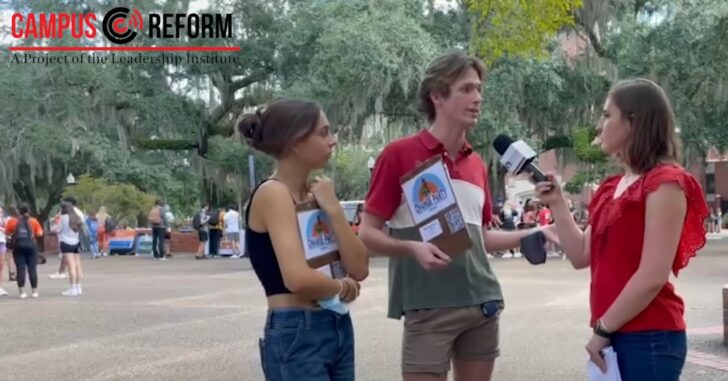 Campus Reform, an organization with a goal to expose “liberal bias and abuse on the nation’s college campuses”, recently spoke with some students on the University of Florida campus to ask them an important question: Should the U.S. Constitution be abolished?

“The time period was rich old white men and that’s exactly what that document says, and stands for and vouches for.”

“It should be abolished. It’s time for a new Constitution.”

Those were just some of the comments by various students who have had enough with freedom, apparently.

The U.S. Constitution covers much more than freedom of speech and the Second Amendment, among the other amendments that we’re more familiar with. As for comments about ‘rich old white men’, many who signed were in their 30’s and 40’s at the time.

In 1780, when James Madison constructed the Constitution he was 29 and the youngest member of the Continental Congress; At 29, he would be the youngest Congressional member today.

The very Constitution that they want to abolish, gives them the freedom to express their desire to abolish the Constitution. There are many countries in the world that this type of public discussion would not stand, and the people speaking out are jailed or killed.

Let’s not forget that part.

Abolishing the current U.S. Constitution and replacing it with a new one would open up debates that would rage on for quite some time, and given that we’re losing freedoms in little pieces for decades, the outcome would likely be nothing compared to what we currently have. And what we have is the most free Country in the world, where we can say and do as we please and own whatever firearms we want.

Previous article: Police Show Up At The EXACT Moment An Armed Robbery Begins Next article: First Date Ends Abruptly After Man Is Shot While Struggling With Armed Robber