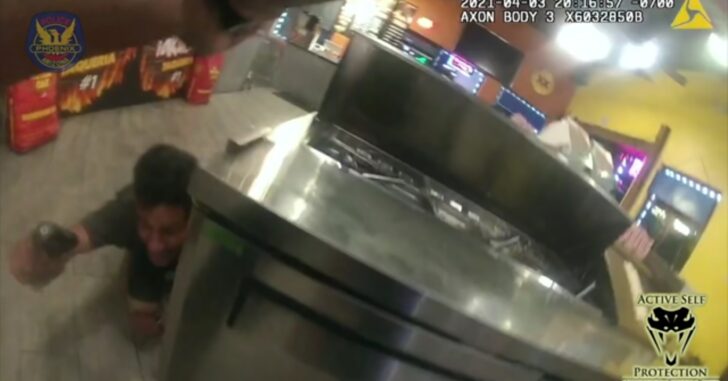 A pair of Phoenix police officers respond to an armed threat at a restaurant where an armed man is threatening and harassing customers. It doesn’t take long for the officers to enter the building and make quick work of stopping the bad guy before he’s able to do any serious damage.

The image that leads into this article above shows the bad guy’s last bad decision ever made which was to point his gun at the officer who was going after him. Multiple shots were fired by the officer while the bad guy was still a threat, and those shots were effective in taking that threat out.

There is quite a bit to look at in this badge cam, from the officer’s response to the actions of customers during the chaos.

What would you do if your loved one was being threatened by an armed man right next to you? It’s impossible to say how we’d react, but it’s important to walk through the options when watching videos such as this one.

Previous article: Man Drives Onto Golf Course And Shoots Golfer Dead, Has 2 Other Bodies Inside Truck Next article: Homeowner Confronts Intruder Inside His Home, Fatally Shoots Him In Self-Defense