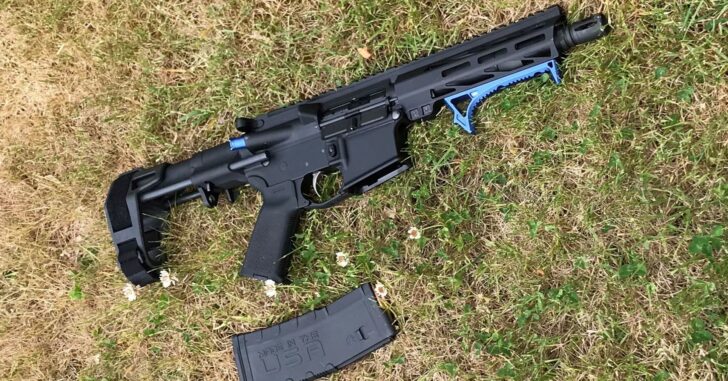 PIERCE COUNTY, WASHINGTON — A friend was helping out when his buddy asked him to go check on his house after a Ring doorbell camera showed someone there. The friend, Aiden Bullock, drove over and noticed someone coming out of a side door of the house.

“This dude just pops his head out, and I look at him, and I’m like, ‘Hey!’ And all of a sudden, I see my buddy’s AR-15 in his hands,” Bullock told reporters.

Fearing he would be shot, he complied with the man’s demands, including giving him his cell phone. The suspect was sweaty and nervous, according to Bullock. He began talking with the suspect, and convinced him to take the stolen property and leave. Well, everything except for the rifle.

“I yell at him, ‘Hey, you need to leave that gun!’” Bullock said. “I couldn’t, in good conscience, let him walk around the neighborhood with a loaded rifle,” he said.

Bullock eventually got the suspect to put down the rifle, at which point Bullock drew his firearm.

“At which point, I pull my gun out. Because I was carrying the whole time,” he said.

The suspect started reaching and Bullock feared he was reaching for the rifle. That’s when Bullock fired a shot into the ditch next to where the suspect was sitting.

“I fired off a warning shot into the ditch next to him because I didn’t want to shoot the guy,” Bullock said. “He grabbed the duffel bag and said, ‘You won’t shoot me!’ And started running away.”

Warning shots can be dangerous to your legal health, and aren’t recommended in the majority of cases. While this incident turned out alright, it very well might not have. The suspect knew that the armed man wasn’t going to shoot him, and what if he had decided to grab the rifle anyway? Would this armed concealed carrier have reacted accordingly to stop a deadly threat?

The suspect was found by police while attempting to hide. He’s facing charges of kidnapping, robbery, and burglary.

Previous article: Drunk New Orleans Tourist Knocks On Doors In French Quarter, Is Shot By Homeowner After He 'Lunged' At Him Next article: Armed Citizen Displays Concealed Firearm In Defense Of Strangers. Would You?