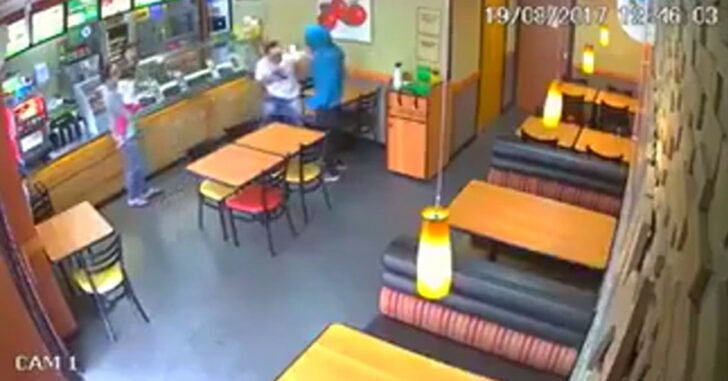 BRAZIL — Assassinations of police officers in Brazil is a real problem, and it may be why this incident happened in the first place. While details are pretty scarce, it seems as though this is a time when the a person jumped the gun. From mirror.co.uk;

CCTV footage shows the officer, who was reportedly with his wife and daughter at the time, waiting to be served, but he suddenly turns on the man behind him. The man in the hoody appears to be minding his own business, checking his mobile phone. But for some reason the officer grows suspicious and takes action. Pointing the gun towards him, the officer tells the man to put his hands behind his head, 1News Brazil reported.

After this, the man begins to frisk the teen to make sure that he doesn’t have any weapons on him. Once he’s ‘clear’, he allows the teen to head to the counter and place his order. Here, this looks like assault with a deadly weapon. I can understand a heightened concern, but I also understand that profiling is a problem as well. When researching this, I read many comments that looked like the following: “If the teen hadn’t been wearing a hoodie with the hood up, he might not have had this happen.” That’s a strange way to look at it, because I’m pretty sure that wearing ‘hood-up’ isn’t illegal. As a teen, I wore hoodies nearly everyday and remember times when I’d be ‘hood-up’ in stores. I also didn’t live in Brazil, but that’s besides the point. What do you think about this video? Chime in below, please.
Categories: General, News, Video

Previous article: Does Carrying Actually Make You Safer? Next article: #DIGTHERIG - Kathy and her Ruger LC9 and Glock 27 in a CrossBreed Holster