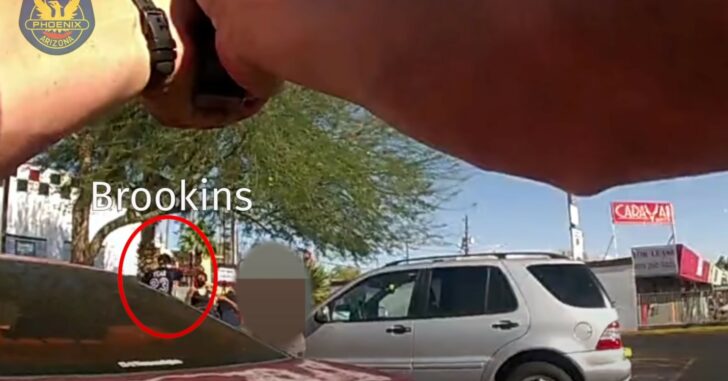 PHOENIX, ARIZONA — 39-year-old William Brookins was shot by a police officer as Brookins was holding two people at gunpoint for allegedly shoplifting from a store moments earlier.

Brookins, who wasn’t an employee of the store that the suspected shoplifting occurred, hopped into a vehicle driven by someone else and told them to follow the shoplifters. Down the road, Brookins confronted the pair and pointed a handgun at them, holding them at gunpoint.

An officer with the Phoenix Police Department was directing traffic nearby and saw Brookins with the gun. The officer approached and gave commands to Brookins to drop the gun, but the commands were not followed. The officer fired and struck Brookins, who was taken to the hospital where he died a few days later.

While not confirmed, Brookins may have been a convicted felon, in which case would not be legally allowed to possess a firearm.

For the sake of the following, we’ll assume that Brookins was in legal possession of the firearm.

As an armed citizen, it is not your duty or responsibility to chase people down who are suspected of shoplifting, and you’re definitely not in the right if you draw your firearm in that situation. Brookins did not respond to the officer’s commands, and it’s very likely he didn’t because he didn’t hear those commands. If you’re holding someone at gunpoint, your focus is on that person and what is happening right in front of you. Everything else can easily be tuned out by your brain, especially if you have no training in a high-stress situation.

There are many more pieces to this puzzle, which the video below will clear up.

It’s a dangerous situation to put yourself in, and this incident could have been entirely avoided had Brookins not chased the suspects and produced his firearm. It’s a tough reality, and I hate to place fault on a man who lost his life in such a way, but it’s irresponsible actions such as this that lead to tragedy.

Previous article: Terrifying Shooting In NYC Caught On Camera Shows Children Caught In The Middle Next article: Driver Shoots Suspect After Being Forced To Stop Vehicle And Pulled From His Car