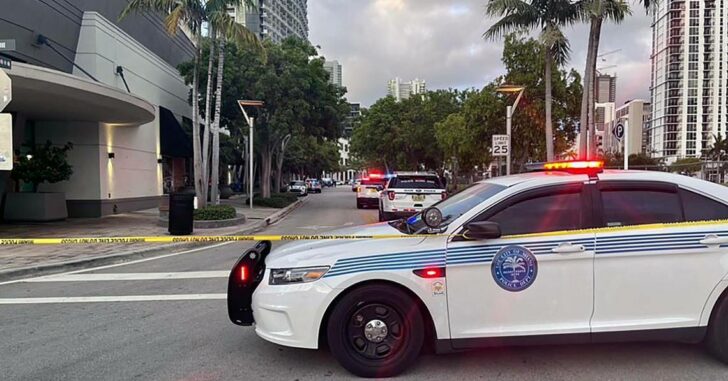 MIAMI, FLORIDA — The Memorial Day Weekend saw Miami wracked with shootings. One shooting alone left two dead and 21 others injured. Unfortunately, the violence did not end with the completion of the long weekend.

Two men walking their dog near Miami’s Midtown Shopping Center found themselves face to face with an armed Otis Brown, a serial violent offender. Fortunately for the dog walkers, they were armed also and ready to fight back.

According to a source, Brown and one of the men began grappling. The other man, who was legally armed with a Glock, hid briefly behind a post and heard his friend get shot in the shoulder. He emerged from behind the post and exchanged gunfire with Brown, who was hit 11 times.

After Brown had drawn his firearm and tried to rob the two men, one of the intended victims immediately took action. The first man wrestled Brown for the gun while his friend took cover behind a sign with the dog. During the struggle with Brown the first man was shot.

The second man, now concerned for his friend, leapt out from behind the sign and opened fire on Brown. During the flurry of gunfire, Brown ended up being shot 11 times. This was enough to end Brown’s violent criminal activity for good.

It turned out all three men were armed. Police have no intention of charging the two dog walkers, as both men were legally carrying firearms. Furthermore, their actions were deemed to be in self defense.

Even a daytime stroll near one of Miami’s largest shopping areas ended up being a life and death situation for these two men. Sadly, we can never know when these kinds of violent attacks could happen. This is why concealed carrying and being confident in your training is so crucial.

So what did the dog do during all this? Well, it took off once the shooting began. Fortunately, it was later found and returned to the owners.

Previous article: Join Us For A Few Days Of Training With Some Of The Best In The Industry! Next article: Home Invader Shot And Killed In Crime-Surging New Orleans