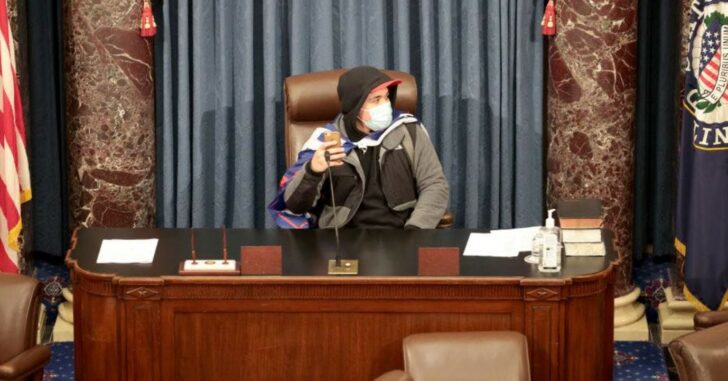 The riot and incursion at the US Capitol building on January 6 has been portrayed in the media as a violent terrorist attack, an attempt to overthrow a democratically elected government by crazed insurrectionists.

However you characterize the debacle in Washington that day, a few hundred people clearly forced their way into the Capitol building. Some smashed their way in, others strolled through open doors as Capitol police looked on.

Oh, and that day’s events have been — SURPRISE! — used as justification for more gun control laws.

Hundreds have since been arrested and charged for their part in what took place at the Capitol and earlier today, Jill Sanborn, the FBI’s Assistant Director for Counterterrorism, testified in front of the Senate’s Homeland Security Committee.

In an exchange with Wisconsin Senator Ron Johnson, Sanborn disclosed that precisely zero firearms were found among the hundreds of people who made their way into the Capitol that day (1:08 on this video).

Johnson: How many firearms were confiscated in the Capitol or on Capitol grounds during that day?

Sanborn: To my knowledge, we have not recovered any on that day from any other arrests at the scene at this point, but I don’t want to speak on behalf of Metro and Capitol police, but, to my knowledge, none.

Johnson: So nobody has been charged with an actual firearms weapon in the Capitol or on Capitol grounds?

Sanborn: Correct. The closest we came was the vehicle that had the molotov cocktails in it and when we did a search of that vehicle later on there was a weapon, but…

Johnson: How many shots were fired that we know of?

Sanborn: I believe the only shots that were fired were the ones that resulted in the death of the one lady.

That lady, Ashli Babbitt, was shot by a still-unidentified Capitol Police officer as she attempted to climb through the broken window of a door within the Capitol building.

Sanborn’s testimony raises some questions. If the events of that day were — as Democrats and the media are so anxious to portray them — a brazen attempt to overthrow the government, why wasn’t anyone in the crowd that invaded the Capitol carrying weapons? If your intent is to sack and occupy the seat of power of the world’s most powerful democracy, shouldn’t you be armed when you do it?

By Dan Zimmerman via TTAG and republished here with permission.

Previous article: Intruder and Occupant Wounded in Early Morning Home Invasion Gunfight Next article: These Companies Do Not Support Your 2nd Amendment