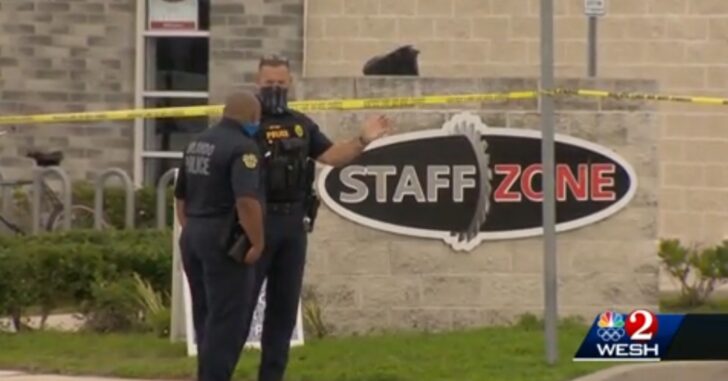 ORLANDO, FLORIDA — A man was shot after allegedly attacking two people with a machete Tuesday morning.  Officers from the Orlando PD responded to the scene of a reported shooting at The Staff Zone, located at 3605 Old Winter Garden Road

According to an OPD spokesperson, the suspect entered the business armed with a machete and apparently upset. He got into an argument with the two employees of the business, then attacked them with the machete. One of the victims was armed and fired at the suspect, who then fled the business on foot. An individual matching the description was located and apprehended by officers, and found to be suffering from a gunshot wound.

The Staff Zone is a job staffing agency. An unidentified woman at a neighboring business told local media outlets that a woman frantically ran into her business saying that someone had been shot.

Officials say that the two victims, a man and a woman, were hospitalized and are in stable condition. They have not identified the suspect or released any information on his condition, any charges that may be pending, or a motive for the attack; however, they have reason to believe that the suspect is a laborer and client of The Staff Zone.

It seems that the use of machetes in attacks is on the increase. Cheap versions can be purchased for only a few dollars, they require no permit or background check, are lightweight, easy to conceal, and require no special skills or training to inflict serious injury or death…yet it is considered a deadly weapon when used to attack and is capable of maiming or killing multiple victims. Many states, including Florida, allow the use of lethal force against an attacker when the victim is in fear for their life.