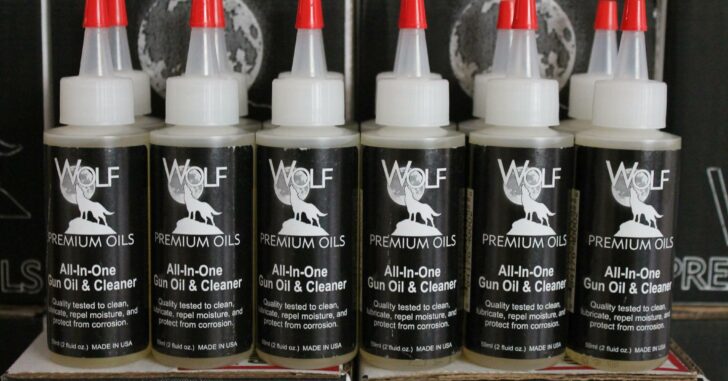 I’m sure that almost all of you have a gun cleaner/lubricant like Hoppes or Rem Oil that you like and use, and likely don’t ever use any other products. If it ain’t broke, why fix it. However, I’m going to challenge that today. Yes, Hoppes, Rem Oil, and the like work well and are used by almost every gun owner in America, but I heard whispers of a new product that recently hit the market that would challenge these gun oil heavyweights. I contacted Mike Wolf, the owner of Wolf Premium Oils and had him send me a couple bottles so I could see for myself whether his product would be able to stand up next to the products we know and love. After speaking with Mike for awhile, it was quite clear that he genuinely believed in his product. I didn’t get the typical marketing speak that most companies dole out, rather, he talked to me straight and was upfront about everything. What really caught my attention was that, despite informing me of what the product could do, he never really tried to convince me that his product was the best thing since sliced bread like most companies will try to do. Rather, every few minutes he’d tell me, “you really just need to try this stuff for yourself and you’ll see what I mean.” So, I did.

I used three different guns to test the oil out. The first was a Remington 1911 handgun that I fired 100 rounds through that day. The second was a Howa 1500 rifle that had seen range time on several different occasions in previous weeks but had not been shot the day of or cleaned. The third gun I used was a Mossberg 835 shotgun that has seen consistently heavy use but was thoroughly cleaned. To test the recently fired 1911, I first cleaned it with my go-to cleaner, Hoppes. After doing this, I did a second cleaning using the Wolf Oil. Why did I do this? Mike had informed me that this was the way they had always tested their product. They would clean a gun with one of the major brands, then use theirs after the gun had already been cleaned. He told me that I’d be amazed at what I would find. Of course, I was. After doing the cleaning with Hoppes, my patches were coming out totally clean. So I put Mike to the test and went ahead and cleaned it a second time using the Wolf Oil. I was totally shocked. My patches were coming out dirty again. Now, this gun doesn’t see a ton of use so it wasn’t totally black but there was much more fouling being removed than I expected, especially from a gun that was supposedly clean.

Next, I cleaned the Howa 1500 using just Wolf’s Premium Oil. I didn’t run any cleaner through it before using the Wolf Oil but I did notice that there was more fouling being removed than I typically see. Obviously, this isn’t exactly scientific but it was definitely a noticeable difference.

To finish the testing, I used Wolf’s Premium Oil to clean my already clean Mossberg 835. Now, this gun sees seriously heavy use and I’ve put thousands of shells through it. However, it was supposedly already clean. I have to say that this was the most shocking of the three guns that I used for the testing. This test was the one that truly convinced me that this product is far superior to anything that’s on the market currently. I did a thorough deep clean on the gun and the Wolf Oil was pulling out so much fouling and dirt that my patches were straight black. This was by far the most cleaning I’ve ever had to do before my patches were coming out clean. Again, this was a gun that had been thoroughly cleaned before I ran the test on it.

First, I have to say I am truly surprised and impressed. Obviously, everybody will stand behind their product, otherwise what’s the point. However, this is one of the few products that could actually stand up to what the company was claiming. Now I understand why Mike kept telling me to just try it. I can without a doubt say that this cleaner/lubricant cleans better than any other product I’ve used, and I’ve used quite a few of them. I’d be willing to bet that it will work better than whatever you currently use. Another thing I noticed is how well it worked as a lubricant. After the cleaning, all of my guns functioned noticeably smoother than they had in the past. Along with this, the oil has absolutely no smell. When I open a bottle of Hoppes, it’s not long before the fumes are overwhelming and I have to open a window and turn the fan on. Not the case with Wolf’s Premium Oil. Even after trying to smell something I couldn’t. I dare you to stick a bottle of Hoppes up to your nose! Another observation I had was how well it worked on the exterior of the gun. I used the oil to clean and shine the barrels of all three guns and it made the guns look like new. One of the most noticeable things about the oil when I put it on the exterior was that it didn’t leave any fingerprints or smudges. The oil acted almost as a moisturizer to the metal. It sounds weird, I’m aware, but this is the best way to describe it. It seemed as though the oil gently soaked into the metal. I have no concerns about this lubricant collecting dirt.

Another great aspect of this oil is that it’s a very effective water repellent. Being in the South, whether you hunt or just conceal carry a handgun, the humidity and sweat does a number on our guns. Wolf’s Premium Oil protects against all this moisture and improves the life of your gun. Plus, it’s not made using Teflon or anything else that will break down over time.

For those of you who shoot competitively or run hundreds of rounds through an AR-15, this is an oil you definitely need to have, as it will actually keep your barrel cooler. Now, I didn’t get a chance to test this aspect of it but it was mentioned to me by Mike and based on the fact that all his other statements have turned out to be true, I’m confident in passing this along. It’s obviously not going to keep your barrel from heating up, but apparently it will be noticeably cooler than if you did not use the Wolf Oil.

Although not necessarily marketed in this way, after seeing the benefits this product had for my guns, I decided to do a quick test on my fishing reels and noticed they seemed to function smoother and I believe the water repellant properties of the oil will help protect my reels from the corrosive nature of saltwater. I didn’t really go too in depth on this aspect but I’m going to have my partner, Captain Drew Nobregas do a thorough test using his charter reels to see if this product can stand up to the toughest of fishing applications. Look for that article to be coming out soon.

This product is available from wolfpremiumoils.com and comes in a 2oz bottle for $9.95. They claim you’ll get 60 cleanings from the bottle and if you are conservative with it this is likely true. However, I will probably get slightly less from my bottle as I had to keep using new patches. I highly recommend that you give this product a try, you won’t go back to whatever you’ve been using.

Originally from the state of Michigan, I came down to Florida to attend Florida State University and have been living here ever since. I enjoy all things hunting, fishing, and shooting and decided I wanted to share everything I’ve learned over the years to help out all of those who live in and visit Florida. When I’m not working on my personal site, I can be found in the woods hunting deer and hogs or out on the water chasing pelagics. I carry concealed and opt for a Remington 1911 loaded with Remington Ultimate Defense 230gr. BJHP in .45acp. My enjoyment for responsible and safe concealed carry brought me to this site.

View all posts by Dieter Heren