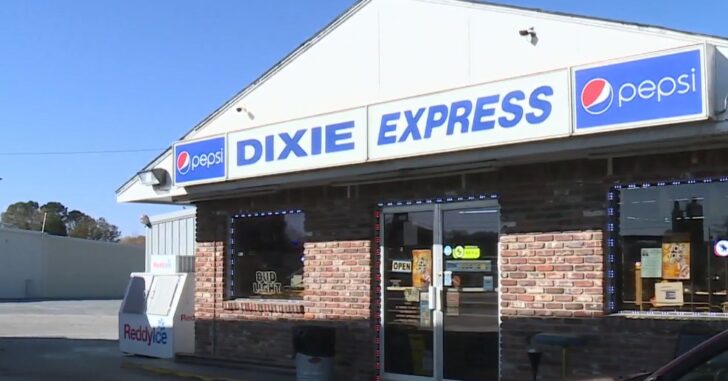 TUSCUMBIA, ALABAMA – If you thought your Monday was bad, what about the guy who was shot and wrecked inside of 10 minutes? A broad daylight armed robbery netted the suspect a bag of money and a bullet in the shoulder, only to be followed by being involved in a car crash minutes later.

Act I occurred at the Fuel City on Highway 72 around 11 a.m., according to Tuscumbia Police Chief Tony Logan. Miranda Mullins was the clerk on duty and said that she was suspicious of the man from the moment that he walked in the door.  In addition to wearing a hood and sunglasses, he was also wearing gloves.  Her suspicion proved true when he approached her at the counter, pointed a handgun at her, and demanded all the money from the register.

Giving him an opportunity to change his mind and walk away, she asked the man if he was joking, to which he replied that he was not. Mullins complied with his demands, opening the register, removing money, and putting it in a makeshift bag. As the robber took the money and began to leave, Mullins pulled her own gun from under the counter and shot the man in the shoulder. He fled to a waiting vehicle occupied by a female and the two drove away.

In Act II, the getaway vehicle ran a traffic light at the intersection of Montgomery Avenue and Avalon Avenue and was involved in a crash.  The crash scene was on the corner of Helen Keller Hospital property, but the man was airlifted approximately 60 miles away to Huntsville Hospital, where his condition was not disclosed. Police believe he may be connected to other robberies in the area and are investigating further. The woman in the car was uninjured.

Mullins shared some advice for others who work in the gas station & convenience store industry, “Get something, protect yourself, make sure if something happens that you are prepared, cause your life’s important”.

Previous article: NC Middle School Student Brings Gun To School, Shoots Another Student, Promptly Detained By School Administrator Next article: WHY WE CARRY: Woman Shot And Killed In Front Of Her Two Children By Ex-Boyfriend In Public