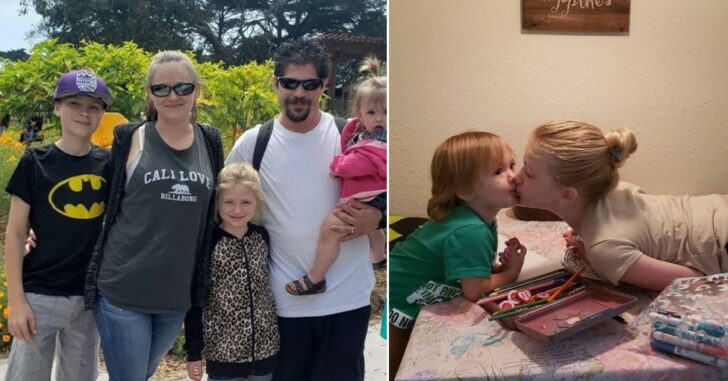 OROVILLE, CALIFORNIA — A wife and mom found herself with a tough decision to make one night; let the bad guy have his way or shoot him as he used her husband as a human shield.

She chose to shoot, and both wife and husband agree with her decisions, even though the husband was left paralyzed.

The harrowing ordeal began at approximately 3:30 a.m. on July 24, as Haley Cherms and her husband, David Sidebottom, were asleep in their home with their godson and their two young children, KNVN reported.

The couple was awakened by their home security alarm, so Sidebottom scooped their baby up and went out to the living room to see what triggered it.

When Sidebottom went to investigate, an armed man popped out of nowhere and put a gun in his face. His wife was able to witness what was going on, and went undetected by the armed intruder. She took this advantage and ran with it, first securing her children and telling them to keep quiet and stay put no matter what.

Then, she went to get her gun.

While Cherms raced to her bedroom to get her gun out of a safe, the suspect, later identified as 33-year-old Cody Faunce, ordered Sidebottom to hand over his keys.

Sidebottom complied with his demands, hoping the armed intruder would take off.

“My mind frame was to give him the keys and get him out of the house,” the father told KNVN.

The man didn’t leave, and instead started breaking things inside the home. Cherms told reporters that if the man only wanted the keys, he’d be gone by now — or at least very soon. Since he was still hanging around, she knew that some difficult decisions were going to need to be made.

“So, I knew that at some point I was going to have to fight fire with fire. I knew that,” she said. “I’m not going to let somebody hurt my kids. If he kills me, what is he going to do to them?”

Moving down the hall, she could hear the man pistol-whipping her husband. Finding an opportunity, she jumps out and empties her magazine on the man. During that time, he pulled the husband close in an effort to use him as a human shield.

Sidebottom ended up taking a few bullets from his wife’s gun, which would ultimately leave him paralyzed. Still, he says that he supports his wife’s decisions to fire, even under the circumstances.

The intruder did not survive the encounter.

The couple said they are thankful that everyone in their family survived the attack, but acknowledged that life has been difficult since that terrifying night.

“That’s exactly what I was supposed to do in that situation to protect my family. I have no idea what he was capable of,” she said. “They have their dad. That’s what’s important.”

A GoFundMe account has been set up for the family, who are definitely in need after this terrible encounter.

This is a truly crazy and intense story, and decisions like this need to be made from time to time. When you’re forced into a situation like this family was, there is no telling what would have happened if different decisions were made, or if the family tried to comply with the armed intruder.