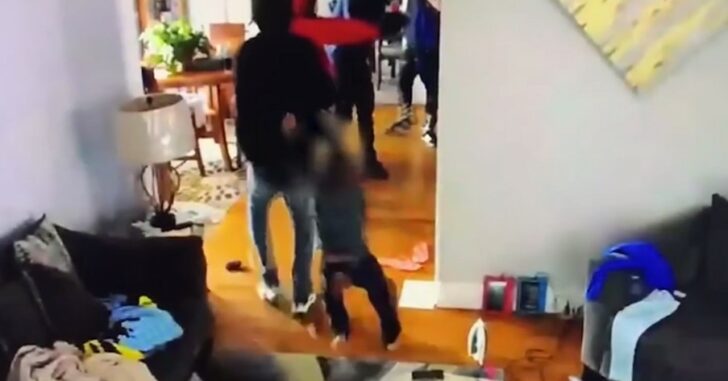 SOUTH BEND, INDIANA — Five-year-old David Johnson was at play in his home around 10:30 on the morning of September 30th while his mother, Tamika Reid, was ironing clothes. Reid heard gunshots moments before hearing a knock on the door of her home in the 500 Block of South Grant Street. Another child opened the door and four men in hoodies, three of them brandishing handguns, burst into the home.

Home surveillance video shows the men taking control of the home, and shows little David fighting off one of the men who forces his mom into another room while another gunman has the other child at gunpoint. Left alone in the room, David frantically looks for something to continue his fight.  Picking up a toy car, he throws it at one of the gunmen, then follows him into the other room, still fighting.

The men left without taking anything and no one was injured.   David told television reporters that he was trying to protect his mom, saying, “I hit him and I tried to throw my car at him.”

So, what lessons can be learned from this terrifying incident? There are many, but always keeping all doors locked and teaching children not to open the door to strangers are the first two that come to mind. And here’s another one…we are born without fear.

The actions of a young child against potentially deadly foes reminds us that fear is a learned response. When we are young, we have no fear. The words and actions of adults, along with other life experiences, teach us to fear.  Fear can be a good thing that keeps us from harm, or it can be a bad thing that paralyzes us.  It can happen in a moment of danger, causing us to freeze in our tracks,  or it can hang over us like a shadow every minute of the day, keeping  us from going places and doing things that we would otherwise do without a second thought.

Safety and security precautions, situational awareness and knowing how to defend one’s self and loved ones in a variety of situations is the antidote for fear.

Previous article: 3-Year-Old Boy, Celebrating His Birthday, Dies After Accidentally Shooting Himself With Gun That Fell Out Of Irresponsible Gun Owner's Pocket Next article: [GRAPHIC WARNING] CA Officer Charged In Shooting Death Of Shoplifter With Bat