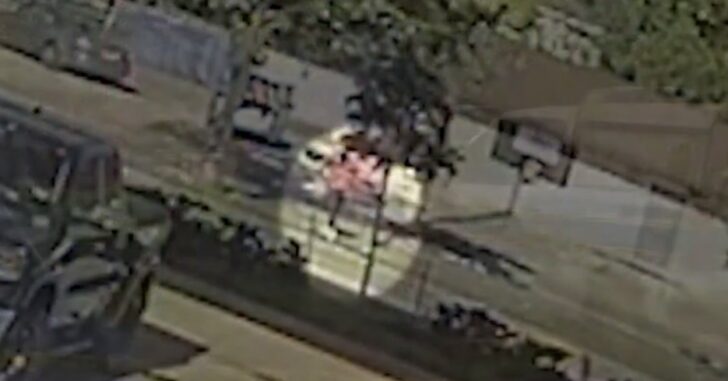 HOUSTON, TEXAS — A man is dead after another man fought with and shot him, apparently after he flashed some cash around, all while he was changing a flat tire on his vehicle.

The suspect was first seen on surveillance video making a purchase inside a gas station. He kept looking out the window of the store at a man across the street, and paid close attention to what he was doing as the cashier rang up his items.

The suspect then exits, and makes his way over to the man, who was changing a flat tire.

Police say the man may have been displaying some cash, as two other women were with him at the car helping him. This is likely what caught the attention of the suspect.

He began to rob the man, but that wasn’t all.

The video shows the suspect assaulted and then shot the driver. The victim ran across the street, but then collapsed on the other side of the road.

The suspect fought with him again and then shot the driver in the back of the head, killing him outside the gas station. The suspect ran from the scene, but not before grabbing whatever he could off the driver.

Police are searching for the suspect, who is said to be a regular at the gas station. Someone knows him, and hopefully they come forward and give the information to police.

This is a sad situation, and a terrible outcome. Remember that people are out there who do not value your life, and will kill you over some cash and personal belongings. This suspect is one of those people, and we have to be prepared if we’re ever faced with them.