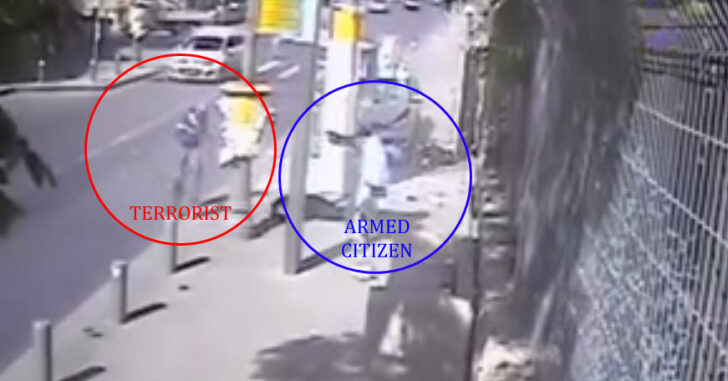 The video above is not for the faint of heart. The decision to show it on our website was not taken lightly, but it highlights just how quickly someone could act to a situation like this if they were armed.

This is not to turn into a political discussion, however here is what supposedly happened:

According to the above video, a “Palestinian terrorist rams Israeli pedestrians in Jerusalem with his car and then uses an ax to stab the wounded.”

A Palestinian terrorist drove his vehicle into a group of several people waiting at a bus stop. He then exited his car with a meat cleaver and began attacking the wounded and others with the implement.

Rabbi Yeshayahu Krishevsky, 60, was killed, apparently both from the vehicular attack and the axe wounds while two other people were seriously injured.

A police commander in the Ra’anana area told Israeli media that civilians chased the perpetrator and caught him.

The armed citizen, who happened to be in the immediate area, fires on the suspect and immobilizes him almost immediately. As other people start to come over to the scene, the suspect musters up the strength to stand again, but is quickly taken down. It is not clear whether the armed citizen fired again, but we do see the terrorist fall to the ground and stop moving. Moments later, the area is flooded with police and bystanders.

The damage that this terrorist could have done beyond what he was able to could have been much worse, had it not been for the armed person in the area.