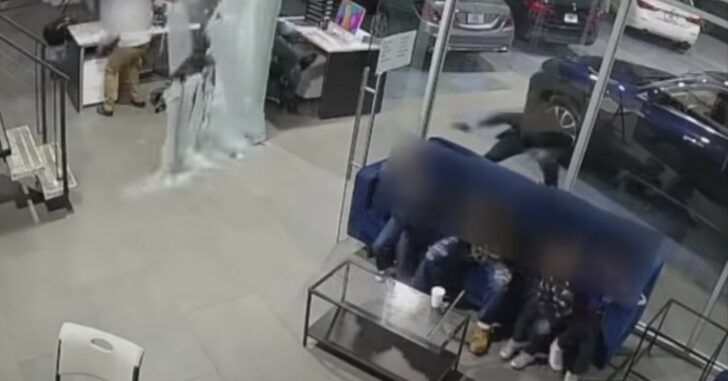 39-year-old Anthony Jefferson and his three children, all innocent bystanders at a car dealership, found themselves in the middle of gunfire after multiple people opened fire.

Police say three men opened fire on another man who was inside the dealership. Jefferson was there to buy his wife a car as a surprise for her upcoming birthday, and didn’t expect he’d be playing super dad in an effort to save his children’s lives.

As the dad heard the gun shots, he got his kids down on the ground and covered them, taking fire that they likely would have taken if he didn’t do what he did.

Jefferson’s wife, Danica Jefferson, told TMZ that the injury left him temporarily unable to walk. This has resulted in the heroic dad being fired from both of his two jobs as a construction worker and head painter at a maintenance company, TMZ reported.

Surveillance video of the incident shows just how heroic the father was, and how crazy the shootout was. The people involved in this paid no attention to innocent lives around them, including the children.

A GoFundMe has been set up for the dad and his family, and has already raised over $160,000.

Hero dad has more surgeries lined up, but thankfully he and his kids are alive.

Police are still searching for the suspects.